Audi CEO says Tesla is significantly ahead in computing and software architecture, and in autonomous driving.
By : HT Auto Desk
| Updated on: 28 Jul 2020, 09:24 AM 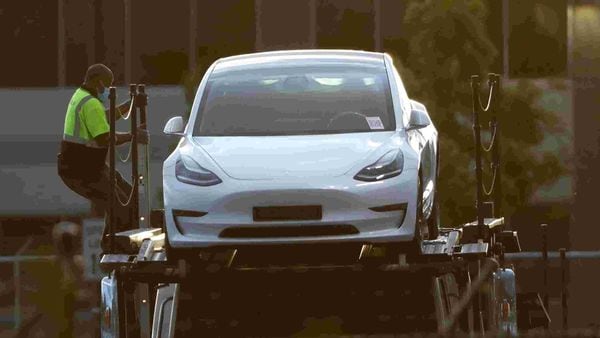 File photo - A Tesla worker can be seen descending from the top deck of a car carrier trailer carrying Tesla electric vehicles at its primary factory in California.

That Tesla has a commanding lead and a formidable grip in the electric vehicle space across the world should really come as no shock to anyone - no pun intended. But when rival car makers start repeatedly showering praise, there is a clear underlining of this dominance. After Volkswagen AG CEO Herbert Diess praised Tesla for showing how selling EVs can be profitable even during a pandemic, Audi's new CEO Markus Duesmann has now said that the California-based company is significantly ahead in some areas of making EVs.

According to Reuters, Duesmann has explained that Tesla has a commanding lead over others in some critical aspects of EV products. "Currently, Tesla has larger batteries because their cars are built around the batteries. Tesla is two years ahead in terms of computing and software architecture, and in autonomous driving as well," he reportedly said.

The lead has ensured a gap between Tesla and others, a gap that Duesmann is determined to close and to this end, he has reportedly created a new group within the car maker that can turn out a new model at a quick pace. Audi may be an established and renowned player in the automotive world but Duesmann wants it to play the EV game like a start-up.

This is hardly the first time that someone from the Volkswagen Group as a whole has lauded Tesla. Diess has been a vocial admirer of Tesla and CEO Elon Musk and he recently wrote on how the company has been able to defy odds and silence doubters. "Elon Musk delivers results that many have deemed impossible," he wrote in response to a post by auto industry researcher Ferdinand Dudenhoeffer, according to Bloomberg. (Read full report here)

Tesla has indeed had its own way of climbing to the top of the automotive world and has had new approaches in manufacturing, designs in software and electronic architecture which enable it to introduce innovations faster than rivals. It is a key factor that rivals are now taking lessons from.