Ather Energy has revealed that the fire occurred due to water seepage in a crack on the battery case of an electric scooter that was brought to its dealership for repair after an accident.
By : HT Auto Desk
| Updated on: 29 May 2022, 11:01 AM 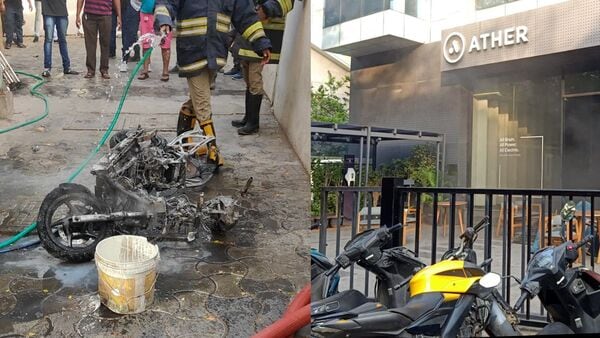 A fire broke out at Ather Energy's Nungambakkam dealership in Chennai on May 27.

After a fire broke out at Ather Energy's Chennai complex last week, the two-wheeler maker conducted an investigation to get a better idea of the situation and the reason behind the fire incident. The Bengaluru-based EV startup issued a statement about the indecent, saying that no person was harmed or injured due to the battery fire. It also noted that the incident is ‘extremely rare in nature’.

In its statement, Ather Energy revealed that the fire occurred due to water seepage in a crack on the battery case of an electric scooter that was brought to its dealership for repair after an accident. The vehicle had a lot of dust and mud on its surface, and to clean this, it was treated with a high pressure water wash. However, upon removing the panels of the vehicle, it was discovered that there was a crack on the top casing of the battery pack, likely due to accident.

Unfortunately, by now, water had entered into the battery pack due to the crack. Ather wrote, “Our vehicles are designed to ensure a safe option…the battery pack is IP67 rated, meaning it can survive being submerged in water for 30 mins." As soon as the team observed the crack and water seepage in it, the scooter was isolated from other vehicles, and moved to a safer area.

However, by then, the battery cells had been shorted from inside due to presence of water, and this led to a thermal runaway event, which led to smoke and fire. “The incident is extremely rare and the first time we have observed it in 150 kms of riding. No other vehicles in the premises were damaged during the incident," the company wrote.

As an additional safety measure, the company said that it is increasing the number of pre-checks for accident cases to avoid similar issues in the future.