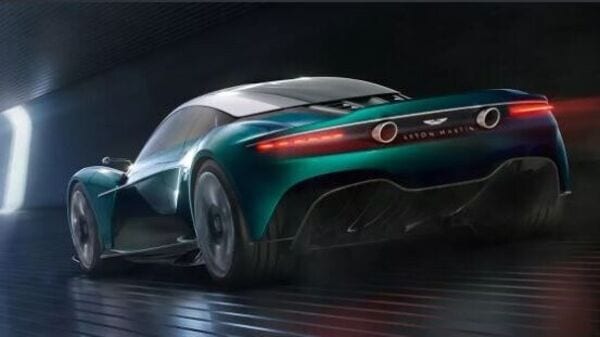 Luxury carmaker Aston Martin will launch its third mid-engined supercar in 2023, placing it below the V8-powered Valhalla and the V12-powered Valkyrie, Carscoops reported. The upcoming was first previewed in concept form by the Aston Martin Vanquish concept back in 2019, and will also be powered by an electrified V8 engine sourced from AMG.

The report stated that the company's president Lawrence Stroll has hinted that the production version of the supercar will drop the Vanquish name used in the 2019 concept, and just like the Valhalla, it will see major changes and evolution from concept to production, in terms of engineering and design, both.

Expect the mid-engined supercar to be based on a carbon fiber monocoque, with aerodynamics inspired by the Valkyrie flagship. The vehicle will be more of a road-focused one and will come with a weight of at least 1,500 kg (3,307 lbs). The model will use Aston Martin’s new infotainment tech that will be rolled out across its entire range starting from the end of 2022, Autocar UK reported.

On the mechanical side, expect the vehicle Aston Martin to use a V8 from Mercedes-AMG as part of a plug-in hybrid system. The twin-turbo 4.0-liter V8 will likely produce 630 hp of power and 900 Nm of torque, like the one found in the Mercedes-AMG GT 63 S four-door. The electric drivetrain could contribute another 201 hp of power, for a combined output of 831 hp. This is lower than the Valhalla’s 937 hp but high enough to compete with the most potent supercars of the segment.

The V8-powered Aston Martin is expected to make a debut in the second half of 2023, followed by a track-only AMR Pro variant for a single-make series. Aston Martin’s aims to electrify its entire range by 2025, and that is when the automaker is expected to launch an electric vehicle.