The drive-in vaccination centre has been set up by the Delhi government and southwest Delhi District Magistrate in partnership with with Akash Healthcare Super Speciality Hospital.A government-run drive-through vaccination centre will be launched at Chhatrasal on Saturday.
By : HT Auto Desk
| Updated on: 26 May 2021, 14:48 PM 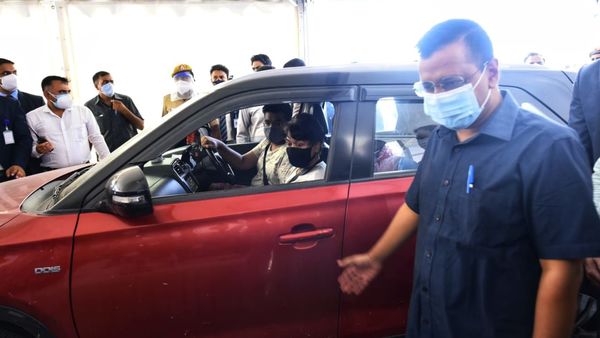 Arvind Kejriwal, chief minister of Delhi, has inaugurated the city's first ever drive-in vaccination centre today in Dwarka. The centre has been set up at the Vegas Mall in Sector 12.

On the very first day, several people were seen getting their Covid-19 vaccine shots while sitting in their cars. Chief Minister Arvind Kejriwal expressed gratitude towards the mall authorities for setting up this centre.

The drive-in vaccination centre has been set up by the Delhi government and southwest Delhi District Magistrate in partnership with with Akash Healthcare Super Speciality Hospital.

According to the officials, these will be used to inoculate people in the 18-44 age group at the centre. The centre will be operational from 9 am till 5 pm. People going for vaccination at this centre will be administered doses of Covidshield vaccin. The Akash Healthcare Super Speciality Hospital has reportedly procured around 30,000 doses of Covishield.

"We will go slow at the start to avoid rush on the road and administer 40 to 50 doses for the initial few days," DM Naveen Aggarwal said. He also said that later on the number of doses administered per day will be increased gradually to around 300.

Speaking at the inauguration of the centre, Arvind Kejriwal has also assured that his government will launch another drive-in vaccination centre at Chhatrasal on Saturday.

Delhi has become the fourth city in the country to set up drive-in vaccination centres. Mumbai was first to embrace the concept of drive-in vaccination earlier this month. Mumbai has gone on to set up more such centres across the city to speed up the process of vaccinating its citizen after its Dadar drive-in vaccination hub showed promises. Similar moves have been made in other Indian cities like Nagpur in Maharashtra and Noida in Uttar Pradesh.

Delhi is one of the worst-affected states in India as the second wave of Covid-19 swept across the country since April. Delhi recorded 156 Covid fatalities on Tuesday, its lowest since April 16, while 1,568 new cases were reported. Overall, the national capital has seen as many as 23,565 deaths so far due to the virus and Covid-related complications.