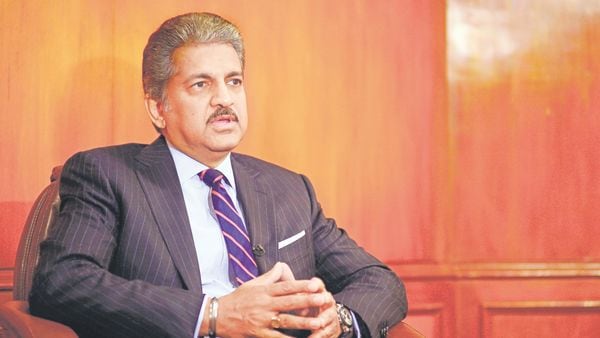 Mahindra group has emerged stronger from the Covid-19 crisis and the 'strange & sinister year' 2020 will be transformed into a year of 'reinvention & regeneration' in 2021, according to the chairman of the conglomerate, Anand Mahindra.

In his New Year address to the 2.56 lakh employees of the group across 100 countries, Mahindra said in spite of all the problems brought about by the pandemic last year, "some unexpectedly great things had emerged from what seemed like an impossibly bad situation".

Drawing parallels to the development of Covid-19 vaccines, in which researchers and regulators have fast-tracked the vaccine development process to 10 months which otherwise takes 10 years, he said there are lessons for the group to learn from it in terms of following purpose-driven business, rebooting and re-evaluating.

An even more important lesson is the power of a quick reboot as demonstrated by how quickly medical science abandoned its conventional approach and rebooted to tackle the new problem of Covid-19 by restructuring their processes, applying the latest technology, cut out the unnecessary loops and hoops that researchers used to jump through, and just went full steam ahead to develop a vaccine, he added.

"Just think, until this year, do you know the average time it took to develop a vaccine – 10 years. Yes 10 years. And yet, thanks to this crisis, we have today developed not one but three effective vaccines, within 10 months!" Mahindra added. Stating that he can't think of a more inspiring example than the development of Covid-19 vaccine, he said the group also emerged stronger by adopting a similar approach.

"And how did we do it? The same way as the vaccine. By re-evaluating our approach; by using technology and reinventing processes; by cutting out the unnecessary and the irrelevant; by using our capital more efficiently; above all, by moving with speed and agility," Mahindra added.

(Also read | 'Made in India is second to none': Anand Mahindra after Thar passes crash test)

Exuding "enormous confidence that we stand on the verge of a new cycle of growth", Mahindra said, "This year, when we round off our 75th Anniversary celebrations on October 2nd, we will look back and our jaws will drop when we reflect on how far we have come from those first few months of paralysis from the pandemic; we will marvel at what a leap we took; what a reservoir of resilience we drew upon."

He further said, "With this DNA that is hard wired into us, I know that the troubles of 2020 will be relegated to the past. This 'strange & sinister year' will be transformed into a year of 'reinvention & regeneration' as we embark upon the third decade of the 21st century and confidently set our course for our centenary."

Ending his message with a video clip of footballer Cristiano Ronaldo taking a giant leap over a defender to score a goal, Mahindra said the image he hoped "will capture what I believe we will achieve in this New Year".