Gadkari said his vision and commitment is to make the Indian automobile industry number one in the world for export of electric car, scooter, buses, auto rickshaw and trucks, in five years.
By : PTI
| Updated on: 13 Nov 2021, 09:28 AM 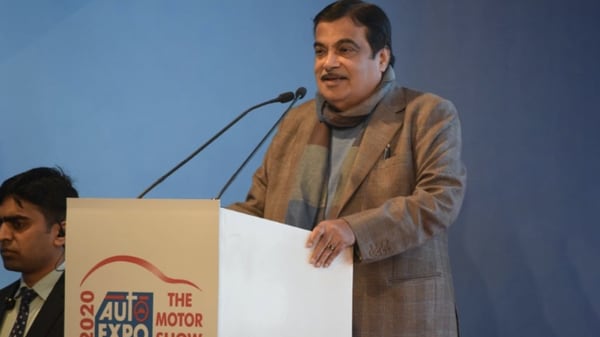 Union Minister of Road Transport and Highways Nitin Gadkari on Friday said his aim was to make the Indian automobile industry number one in the world, for export of electric vehicles, in five years time. "India's future is very bright, presently our automobile industry's turnover is ₹7.5 lakh crore. Within five years our it will be more than 15 lakh crore and this is the industry which is generating the highest number of jobs, exports and revenue to state and central governments," Gadkari said.

Speaking at the first edition of Ananthkumar memorial lecture virtually, he said his vision and commitment is to make the Indian automobile industry number one in the world for export of electric car, scooter, buses, auto rickshaw and trucks, in five years. "Our aim is to increase exports, reduce imports and at the same time we are cautious about ecology and environment. The three important pillars of Indian society are economy, ethics, and ecology and environment. Keeping this in mind we want to make India, number one economy in the world," he added.

The memorial lecture was organised on the occasion of the death anniversary of former Union Minister Ananthkumar, by the Ananthkumar Pratishtana. Further Gadkari dwelt on the government's plans to promote LNG, Green Hydrogen from wastewater, ethanol, electric vehicles and flex engines, while appreciating work done by startups, businesses and research establishments in Bengaluru in this regard. He also appealed to people to buy vehicles with electric or flex engines (where one can use hundred percent petrol or ethanol), which will help in controlling the pollution. On the transport sector, Gadkari said, "our first priority is to water ways, second is to railway, third for road and fourth aviation, but unfortunately now, 90 per cent of the passenger traffic is on road and 70 percent of goods traffic is on road."

Citing examples of highway road work being completed in a record time, he further said, "we are ahead in road construction, my mission, my target is to make Indian roads, of US- standard within three years." On the 26 green express highways, the Minister said from Chennai to Bengaluru also we are making green express highways.

Highlighting the initiatives taken for 103 waterways by the government when he was the Minister for shipping and waterways, he said water ways are very economical. Gadkari, while noting that logistic cost is a problem in India, said, "our logistic cost is 16 to 18 percent....considering the competition, it is time for the economy and the government to reduce the logistic cost to 10-12 per cent and we are working on it."

Assuring a lot of projects for Karnataka, during his next visit, he said he is also working on the Bengaluru ring road and the work will be implemented soon. Gadkari also fondly recalled his long association with late Ananthkumar both in party and government, calling him "brother".