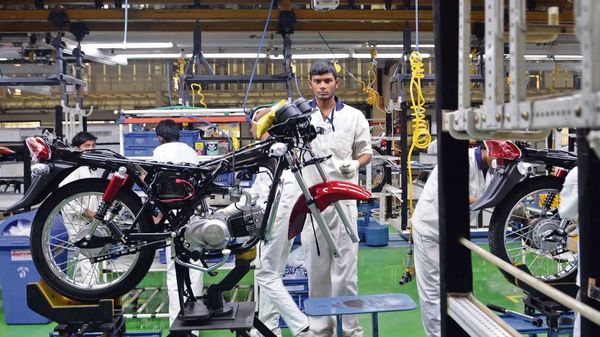 Hero MotoCorp has decided to extend suspension of production to May 16, due to the surge in covid-19 cases.

World's largest two-wheeler manufacturer Hero MotoCorp has decided to extend shutdown across its facilities which had begun in April. The decision comes as the country is still trying to cope with the surge in Covid-19 cases in the past few weeks.

Hero MotoCorp issued a statement on Sunday saying the shutdown also includes its Global Parts Center (GPC) in Neemrana and the Centre of Innovation and Technology (CIT) in Jaipur.

The two-wheeler manufacturer had decided to shut down its facilities in a phased manner starting April 22 to May 1, which was further extended to May 9 later. The shut down halted operations at Hero MotoCorp's six manufacturing units located at Dharuhera and Gurugram in Haryana, Chittoor in Andhra Pradesh, Haridwar in Uttarakhand, Neemrana in Rajasthan and Halol in Gujarat.

Hero MotoCorp issued a statement that read, "The company is continuously monitoring the situation and is ready with its business continuity plans to be able to quickly resume and scale up operations as and when the situation improves."

The decision to shut down facilities across the country may likely impact Hero MotoCorp's output for the month. It is feared that low demands this month has forced a lot of manufacturers to scale down production. The Hero MotoCorp facilities that have been impacted by this shutdown has a total yearly production capacity of 90 lakh units.

Hero MotoCorp is the second vehicle manufacturer in the last few days to announce an extension of their ongoing shutdown. Earlier last weekend, India's largest carmaker Maruti Suzuki too had announced that it will extend its 'planned maintenance' across facilities in Haryana to May 16.

Maruti also fears that demand for its cars may go down due to the ongoing Covid-19 restrictions across the country. It may consider scaling down production too given the current Covid-19 situation across the country. According to the top management in Maruti, the problem currently is about sales volumes. It said that several dealers have been forced to shut shops sales because of a partial lockdown and curfew in several states.