Mercedes vehicles undergo a variety of tests in which the effects of extreme cold on handling, ergonomics, thermal management, and cabin comfort are examined.
By : HT Auto Desk
| Updated on: 13 Feb 2022, 05:57 PM 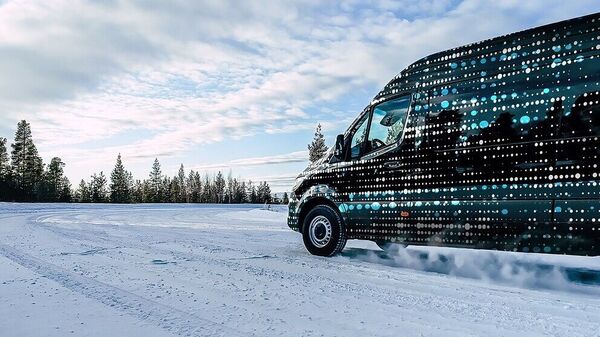 Upcoming 2023 Mercedes-Benz eSprinter EV is undergoing winter endurance testing in temperatures up to minus 30 degrees at testing grounds in Sweden's Arjeplog, close to the Arctic Circle. Scheduled for a launch in the second half of 2023, the new eSprinter electric van is expected to handle extreme conditions.

Mercedes vehicles undergo a variety of tests in which the effects of extreme cold on handling, ergonomics, thermal management, and cabin comfort are examined. During this testing, every single part of the new eSprinter EV van is scrutinized for faults.

The tests also put to test the vehicle's low-temperature resistance of drive components, heating systems, software and interfaces in specifically built cold chambers, where the vehicles are cooled down before the test drives. The charging behaviour and charging management are also examined and optimised precisely.

After half of several weeks of planned testing, Mercedes says the eSprinter proved that it can handle both ice and snow, extreme temperatures and can cope with the most difficult test cycles. The automaker has invested around 350 million euros in the next generation eSprinter and approximately 50 million euros in adapting the production in the three plants.

The production of the new eSprinter will be launched in the USA and Canada with production starting successively in the second half of 2023. Production will then start in Germany's Duesseldorf and Ludwigsfelde. The carmaker says that a central guiding principle at Mercedes-Benz is sustainability, and thus the next generation eSprinter will be produced CO₂-neutrally.

Mercedes eSprinter will be available in three battery versions and numerous body variants – from the panel van to the chassis for box bodies, the van will not only open up new customer segments, but new markets such as the US and Canada. In comparison with the current eSprinter, the range will be more than double depending on the configuration.