Generation of electricity may need to be expanded as more and more EVs hit the roads and harnessing renewable sources even more may be the way forward.
By : Bloomberg
| Updated on: 31 Jul 2020, 08:02 AM 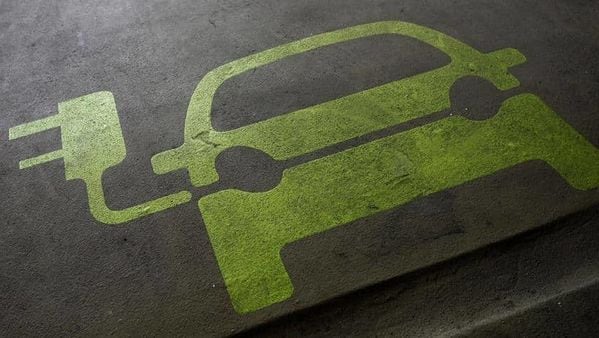 File photo for representational purpose - A sign is painted on a parking space for electric cars inside a car park in Hong Kong.

Energy Absolute Pcl took a detour from developing solar and wind farms to lead Thailand’s biggest electric-vehicle venture. While it’s still betting that EVs have the biggest growth potential, the company is also returning to its roots in renewables.

The Thai utility is assessing the viability of developing two dam-based hydropower projects in Laos, according to Deputy Chief Executive Officer Amorn Sapthaweekul. The study will take two years, and the projects would generate power for distribution in Laos as well as export to other countries.

“We’re trying to diversify and find new businesses that will deliver constant revenue and reduce risks that our EV segment could face in the future, such as from another pandemic," Amorn said in an interview. Hydropower plants could provide a steady income stream to balance periodic fluctuations from transport investments, he said.

Still, the dam projects are long-term ventures which would only start after the company has completed planned battery and EV ventures, Amorn said.

Energy Absolute is debuting its electric ferries on Friday, with public test-runs expected in September, Amorn said. The planned fleet of battery-powered ferries will serve commuters along the Chao Phraya River in Bangkok. Also, a new model of electric car and large-scale battery factory could both be ready within this year.

The majority of income currently comes from solar and wind farms, but in several years, when a subsidy from the Thai government expires, these projects may not be profitable anymore, said Suwat Sinsadok, analyst at Finansia Syrus Securities Pcl. Battery and EV businesses won’t be enough to offset what’s lost from solar and wind farms, and transport ventures have higher risks and competition compared with power businesses, he said.

The efforts of Energy Absolute founder Somphote Ahunai to diversify from renewable energy into EVs and vehicle batteries has prompted comparisons to Tesla Inc. and its leader, Elon Musk. Somphote’s stake in his company is worth about $1.3 billion, according to data compiled by Bloomberg.