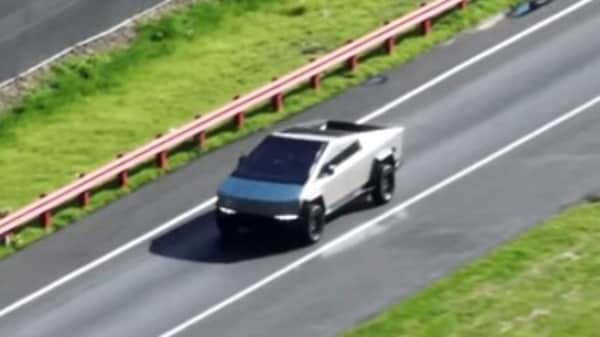 Tesla Cybertruck is one of the most-awaited and multiple-time delayed projects the US automaker is working on. The electric pickup truck has been spotted multiple times parked or going through road tests. Now, a video has emerged showing the electric pickup being tested on a test track. The track in question appears to be Tesla's Fremont factory test track.

The Cybertruck can be seen sporting production-spec side view mirrors, and a singular windshield wiper on the side of the windshield. The vehicle also appears without its aero wheel covers, which are likely to be seen in the production model. Another change from the truck’s previous prototype includes more rounded edges in order to meet pedestrian safety requirements. However, the latest video suggests that the Tesla Cybertruck is inching closer to production.

The Tesla Cybertruck in the latest video is seen lapping on the track at a decent speed, which is in line with the auto manufacturer's philosophy of making the vehicle a pickup that blends performance with off-roading capability.

Tesla has delayed the Cybertruck production multiple times despite committing. After being delayed a number of times, now the Cybertruck is slated to enter mass production by the end of 2023. At the same time, legacy players like General Motors and Ford along with EV startups like Rivian have already introduced their electric pickup trucks. Both Ford and GM are working on their EVs aggressively, which may leave Tesla as a late entrant to the party.

Ford F-150 Lightning along with other electric pickups that have already hit the market or are ready to launch soon come impressively powerful. This could spell bad news for the Tesla Cybertruck, as it is considered late in the segment.