Project DeepSpace from Hennessey is doggedly determined to make the quickest, most capable electric hypercar ever but one that will also be the most-expensive of its kind.
By : HT Auto Desk
| Updated on: 06 Jul 2022, 10:53 AM 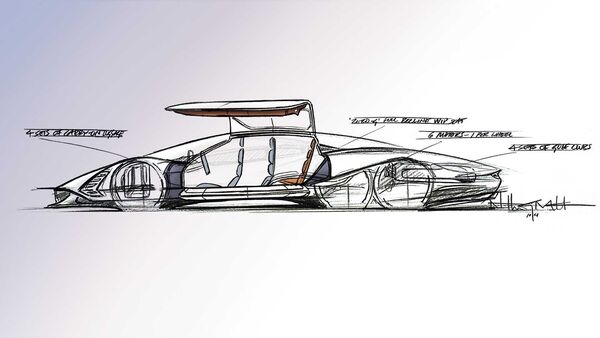 Hennessey hypercar aims to be the quickest four-seater car to reach 0-322 kmph.

In December of last year, Texas-based Hennessey revealed massively ambitious plans of an electric hypercar called DeepSpace with six wheels that could make the best of performance models on global roads at present appear outdated. It was also confirmed that the production would start from 2026 and that the eventual model could cost upwards of $3 million. CEO John Hennessey has now confirmed that the electric hypercar could also offer a per-charge range in excess of 1,000 kms which could make it a marathon runner among EVs while also being a sprint specialist.

Hennessey says that the per-charge range on the electric hypercar being developed would be possible courtesy large battery packs inside the vehicle even though he admits battery weight remains a big concern. This is because an ultra-capable electric hypercar also needs to be light in order to have its performance credentials. And Hennessey has already promised a lightning quick acceleration from standstill to 200 miles per hour or 322 kmph. It has also been confirmed that the six electric motors could combine for a total power output of around 2,400 hp.

But while the product being developed under ‘Project DeepSpace’ may appear to be a seriously fast, ultra-performance vehicle, it is also looking at being a luxury vehicle with a cabin to rival any model from a traditionally opulent segment. Hennessey has drawn comparison between the rear seats in the EV to luxury seats inside a private jet.

With only 105 units of DeepSpace planned for production, it is obvious that this EV would be ultra exclusive. A prototype is expected to be unveiled by 2025 with the final production model set for its unveil in 2026. The first unit of the DeepSpace has already been booked.