Tesla recovers as shipment from China bounces back to record numbers

Thousands of workers at the Tesla factory were in a closed-loop system till June 10 when normal production cycles resumed.
By : HT Auto Desk
| Updated on: 08 Jul 2022, 15:02 PM 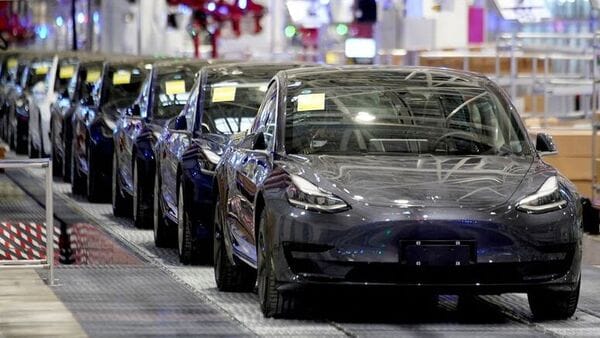 File photo: Tesla China-made Model 3 vehicles are seen during a delivery event at factory in Shanghai.

Tesla has rebounded and how in China with shipments from its Shanghai facility in June hitting a record 78,906 vehicles in the past month, more than double of the 33,155 units delivered in the same month of 2021. Tesla has found going tough in the world's largest automotive market with Covid-induced lockdowns and restrictions once again challenging manufacturing cycles earlier this year. But the latest numbers are likely to be a major shot in the arm for the world's largest EV (electric vehicle) maker.

China is a core manufacturing center for Tesla as well as a key market. The Shanghai facility was the first Tesla factory outside of the US and not only caters to local demand but dispatches units to select European markets as well. The lockdown restrictions in the past had adversely impacted manufacturing lines and supply chains with the month of April seeing just a paltry 1,512 units for the domestic market and none for exports. As such, the June figures are even more significant because in pre-Covid times, the facility was able to roll out over 2,000 units each day. The facility rolls out nearly half of Tesla's global production when functioning at full capacity.

With easing of lockdown restrictions, Tesla managed to bring back production up with employees working under a closed-loop system and on-site residence. Critics alleged that the quarantining of employees was inhuman. Normal production resumed on June 10 with workers being allowed to leave the premises for the first time in weeks. The Tesla factory in Shanghai employs around 10,000 people and primarily manufactures Model 3 and Model Y EVs.

What may be helping Tesla also is that after months of slump in overall vehicle sales, the Chinese automotive market is scripting a turnaround.