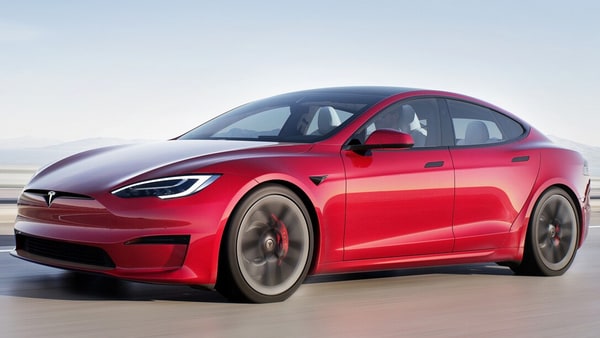 Tesla Model S Plaid comes as the flagship sedan from the EV manufacturer.

Tesla Model S Plaid electric sedan has reportedly set a new quarter-mile record by covering the distance in just 8.834 seconds, at a top speed of 260 kmph. The flagship high-performance sedan of the US electric car brand is capable of racing 0-96 kmph in as little as 1.99 seconds, claims the automaker. Tesla also puts the official quarter-mile time at 9.23 seconds with a 249 kmph trap speed. Tesla CEO Elon Musk also took notice of the event.

(Also Read: Lamborghini to debut its most powerful Aventador tomorrow: Things to expect)

The most recent record was reportedly created by a modified Tesla Model S in February this year. It reportedly reached the 251 kmph speed mark in just 8.94 seconds. A Tweeter user posted these details and claimed the car shredded a lot of weight. Elon Musk responded to the tweet by saying “Nice!"

Tesla North reported that the modified Model S Plaid shredded the weight of around 272 kg. Unfortunately, the owner didn't record the quarter-mile drag race on camera. Interestingly, this is not the first time a record has been created with the Model S Plaid. Several owners previously tried different stunts and records with the all-electric high-performance luxury sedan.

Tesla Model S Plaid comes with a top speed of 322 kmph and it promises a 560 km range on a single charge. The Model S Plaid is also claimed to come with a 0-100 kmph acceleration capability in 2.1 seconds. Tesla claims the AWD drivetrain equipped electric car churns out a total power output of 1,033 PS from its quad electric motor setup.