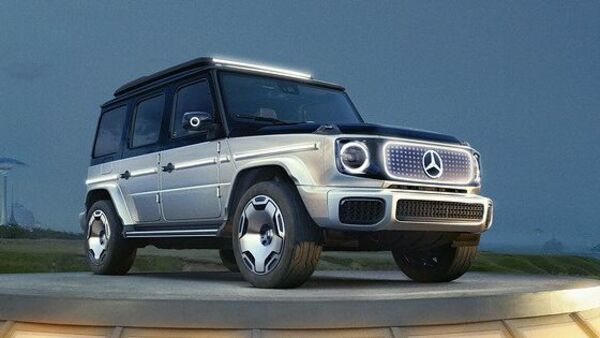 Mercedes-Benz EQG with silicon anode chemistry cell is expected to offer up to 40 per cent extra energy than the standard EQG.

Mercedes-Benz has revealed that its upcoming EQG, which is the all-electric iteration of the mighty G-Class luxury SUV will get silicon anode battery chemistry, in order to offer a high range and more power. This will make the EQG the first production EV from the three-pointed star brand to come with silicon anode battery chemistry. Showcased in form of Concept EQG back in September last year at IAA Munich, the all-electric iteration of the G Wagon SUV has been making headlines. The German luxury car marquee has announced that it will offer the silicon anode battery with the EQG as an option, which means it will come with an additional premium for the buyers who seek more power, and more range.

Speaking about the silicon anode chemistry, this technology makes the EV batteries high-density ones, ensuring more power output compared to conventional lithium-ion batteries. Also, they offer a significantly higher range thanks to the higher energy density. The EV battery packs are huge in size but this technology promises to offer more energy within the same size limit. As Mercedes-Benz claims, the EQG with silicon anode battery chemistry would offer a 20-40 per cent boost in energy density compared to existing battery packs. This would allow the energy density to reach more than 800 Wh/l at the cell level. This could also break the path for a new technology for future electric vehicles.

Mercedes-Benz has said that the EQG electric off-roader will not enter production before 2024. By then, expect the auto giant to reveal more interesting details about the electric G-Class. The automaker has not said if the silicon anode battery will debut with the production model, but expect the new tech-enabled battery to come a year or so later after the market launch of the electric SUV, which would take place sometime in 2025.

Mercedes-Benz has already joined hands with California based company Sila which specializes in developing next-generation lithium-ion battery materials. It will make the silicon anode materials for the EQG batteries using renewable energy, claimed the company. The automaker made a huge investment in 2019 to bolster its EV onslaught and the EQG is expected to lead the way for significantly longer-range EVs.