Energica Experia electric adventure motorcycle has been revealed for the global market. It is unlikely to arrive in India anytime soon.
By : HT Auto Desk
| Updated on: 17 Jun 2022, 11:12 AM 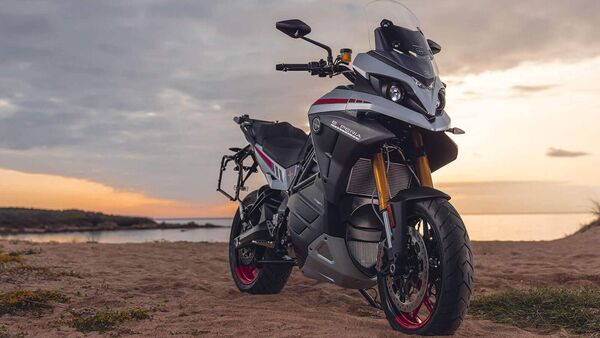 Energica Experia can be ridden in four modes - eco, rain, urban, and sport.

The bike comes with a battery capacity which is rated at 22.5kWh. The charging time of this battery stands at 40 minutes for an 80% charge. Using a 24kW DC fast charger, the charging time can be taken down significantly. In addition to this, there are some other charging options available.

The electric battery supplies charge to an electric motor generating 101bhp and torque at 115Nm. The company also says that it has been able to increase the overall cruising range of the bike by tuning down the performance of this motor. This output is slightly less than the streetfighter and roadster cousins from Energica.

The motorcycle can be ridden in four modes - eco, rain, urban, and sport. In addition to this, it also gets a six-level traction control system, cruise control, and a TFT display. It also comes with standard heated grips but the same will be made optional in the mass market model which goes on sale internationally. Also, there is four-level regenerative braking – high, medium, low and off.

Energica has developed a brand-new tubular frame for the Experia given the different set of purposes of the motorcycle. Also, the battery, battery controller, and motor were specially designed for touring requirements. It is not hard to guess from the image that the Experia has been designed to offer a rather relaxed and upright riding position to allow riders to munch miles without breaking a sweat.

The bike is unlikely to come to the Indian market anytime soon, as Energica doesn't retail any of its products in the country.