Kia EV9 is the flagship electric SUV from the manufacturer.

Kia has announced that their EV9 electric SUV has entered the final stage of testing. The EV9 will be the flagship electric SUV which will compete against other large SUVs. The Kia EV9 has been under development for over 44 months. The SUV is currently being tested at Kia’s global Namyang R&D centre in Korea for its four-wheel drive system. The SUV will be launched in the first quarter of 2023.

The production-spec EV9 is based on the Kia Concept EV9 that was showcased at AutoMobility LA in Los Angeles last year. From the spy shots, it can be seen that the production-spec version is quite close to the concept. The brand is following a design philosophy that Kia calls ‘Opposites United’. 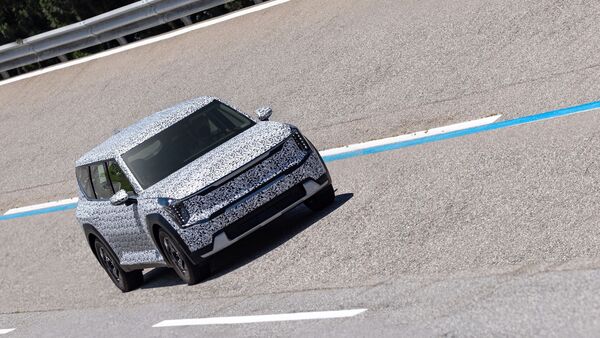 Kia EV9 will be unveiled in the first quarter of 2023.

The EV9 is based on the e-GMP or Electric Global Modular Platform that is also being used for Kia EV6, Hyundai Ioniq 5 and Ioniq 6. The space of the EV9 is expected to be more than the Kia Telluride which is the current flagship SUV that gets an internal combustion engine. The e-GMP is an electric skateboard platform. So, the wheels are placed on the corners and in the middle there is a flat floorboard that houses the batteries.

The e-GMP platform helps in better packaging as there is no engine, transmission, fuel tank or driveshaft. The architecture supports 800V charging capability which enables fast charging. So, the vehicle can charge in just 18 minutes. However, this does depend on the size of the battery. As of now, the size of the battery pack of EV9 is not known. Details regarding the powertrain of the EV9 is also not known but it can be similar to the EV6 and there would be all-wheel drive on offer.