Home Auto Electric Vehicles 2022 Volkswagen Id.buzz Reborn As Electric Avatar Of Kombi From The Past

2022 Volkswagen ID.Buzz reborn as electric avatar of Kombi from the past

Volkswagen ID.Buzz aims to continue the legacy of the Kombi or Bulli almost 72 years after the carmaker assembled the first editions of the iconic vehicle. Though still in prototype stage, ID.Buzz is expected to hit production soon.
By : HT Auto Desk
| Updated on: 10 Mar 2022, 07:02 AM

2022 Volkswagen ID.Buzz reborn as electric avatar of Kombi from the past.

Volkswagen has taken the covers off the ID.Buzz, an electric microbus or van inspired by the iconic vehicle of the fifties and sixties nicknamed Kombi or Bulli. The vehicle, which is mostly associated with the hippy movement, was unveiled during a global premiere on Wednesday. 2022 Volkswagen ID.Buzz is expected to hit the production line soon as the carmaker aims to launch it in the European markets by the end of this year and in the US in 2024.

Volkswagen has unveiled two versions of the ID.Buzz. One is meant to carry passengers, while the other one is meant for commercial purposes to move cargo. The European version of the ID.Buzz has a wheelbase of 2,988 mm. Both ID.Buzz and ID.Buzz Cargo have a total length of 4,712 mm and a width of 1,985 mm. The height is 1,937 mm for the passenger version and 1,938 mm for the cargo version.

2022 Volkswagen ID.Buzz is based on the Modular Electric Drive Kit (MEB) platform, which will underpin future electric cars from the Volkswagen Group. Currently, 30 percent of the electric vehicles produced by the group are based on MEB. By 2025, Volkswagen aims to take the figures to 80 percent.

Ralf Brandstatter, Chairman of the Board of Management of Volkswagen Passenger Cars, said, “The ID. Buzz is a genuine icon for the electric era. A car, the likes of which only Volkswagen can build. In the 1950s, the Volkswagen Bulli stood for a new feeling of automotive freedom, independence and great emotion. The ID. Buzz picks up on this lifestyle and transfers it into our time: emission-free, sustainable, fully networked and now ready for the next big chapter: autonomous driving. With this car, we are bringing together the core themes of our ACCELERATE strategy in one product for the first time." 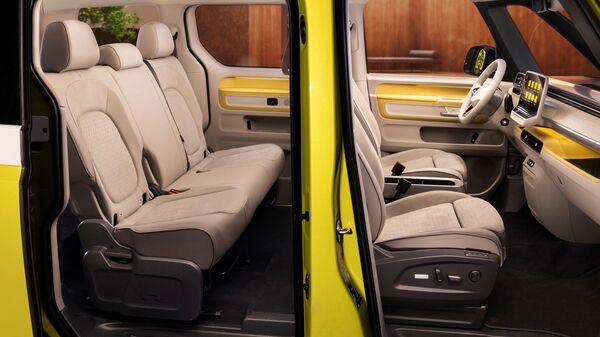 Volkswagen said the first five-passenger versions of the ID.Buzz will come with a 82-kWh battery and a 201-horsepower electric motor with a 145 kmph top speed. Volkswagen said that the battery can be recharged from 5 percent to 80 percent in just 30 minutes using a fast charger. In Europe, bidirectional charging will allow the vehicle to provide electricity to homes when needed.

The US version of the ID.Buzz will have a longer wheelbase and will be able to seat six passengers.

Volkswagen has not shared any details about the battery or engine of the ID.Buzz, the North American heir to the original T1 microbus. However, the German carmaker said that it will offer more variations in battery capacity in the ID.Buzz from next year.