Watch: On Doomsday, this Apocalypse Hellfire 6x6 may well drive past extinction 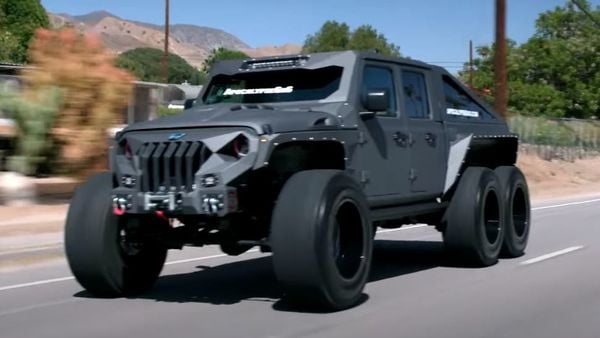 Apocalypse Hellfire 6x6 looks like a mean machine straight from a Hollywood sci-fi movie. Except, this monster is very real. (All images courtesy: Apocalypse Manufacturing)

Imagine driving down a serene country road, soft music serenading the scenery and a lullaby-like gentle breeze. And then, without much warning, there's a roar from somewhere. It turns into a thunder and from the horizon behind emerges an absolute monster of a vehicle that makes your rear-view mirror tremble. Chances are you are seeing Jay Leno chomping down miles in his audacious Apocalypse Hellfire 6x6. Our advice? Just let him pass. It may not be an everyday drive option but even when parked safe, Apocalypse Hellfire 6x6 has a threatening automotive aura around it.

Leno, a popular American TV personality, may need no introduction but the Apocalypse Hellfire 6x6 is quite the ‘visiting card on wheels’ if there was one ever needed. It is reported that the vehicle is essentially a modified Jeep Gladiator but the work by a Florida-based company called Apocalypse Manufacturing to make it what it is is both impressive and outlandish.

Buckled in? Good, take a glimpse of this.

The Apocalypse Hellfire 6x6 stands - and pounces - on mammoth 40-inch wheels and at its core is a 6.2-liter Chevy LS3 V8 which produces 500 hp. The rear-bed of this mean machine measures in at eight feet and the entire body is done in Kevlar paint. 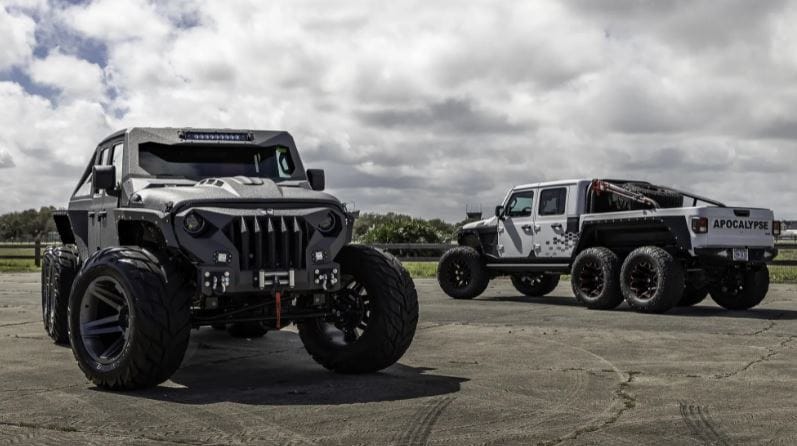 And in a video posted on Youtube by Leno himself,  Joseph Ghattas of Apocalypse Manufacturing admits this devil isn't really meant for daily driving. "At some point in the ownership experience you go off-roading in it," he says. "But is it their daily thing? No. Mostly to protect them from zombies."

Ghattas also admits some of the ideas behind the modification are inspired by Tesla Cybertruck but chances are that the  Apocalypse Hellfire 6x6 could dwarf even the Cybertruck when parked side-by-side.

The cost of the entire modification comes to around $190,000 (approximately ₹1.40 crore) and while it is obviously anything but affordable, the company would take three weeks from the date of order to get the job done. That's some fair warning before an apocalypse or a zombie outbreak - you've been forewarned.