Sizzling ride, literally: This flame-throwing car is mad as max

The Lada 2106's outer headlamp bezels have been converted into flamethrowers.The customised car can throw flame 20 feet from the vehicle.
By : HT Auto Desk
| Updated on: 04 Aug 2021, 10:48 AM 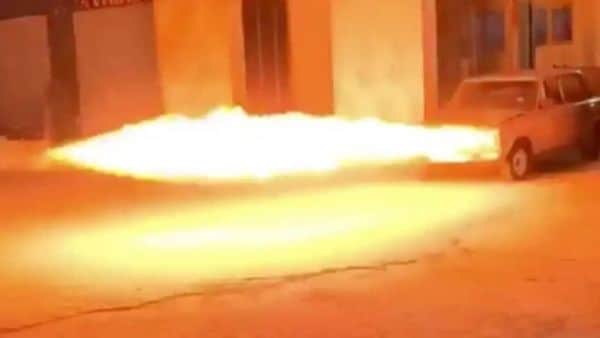 When we talk about funky car accessories and gadgets, James Bond and Aston Martin are the two names that come to mind. But, it seems this man from Russia loves to think like Q the quartermaster of 007 movies. Just like the Aston Martin DB10 with a flamethrower from the movie Spectre, this Lada 2106 comes weaponised with flamethrowers. The car looks like very much inspired by the movie Mad Max that had some stunning post-apocalyptic menacing-looking vehicles.

The little sedan's outer headlight bezels turn into jets of flame. However, it is not revealed how the system actually works. A flamethrower mounted on a vehicle is nothing new as it is being used by militaries across the world for decades. In those cases, the flame guns send combustible fuel through a pressurized tank and ignite it while leaving the nozzle.

A video has been uploaded on Reddit showing a man getting into the Lada 2106. Then the outer headlamp bezels of the car turn into flamethrowers. As it appears, the flame guns can shoot out fire at least 20 feet from the vehicle. The driver can either sustain the flame or launch it multiple times.

The video also reveals there is a sound while the flamethrower is working. It could be the sound of a pump generating power to propel the fuel out of the nozzles.

A brief glimpse of the cabin of the Lada was shown in the video. But that doesn't reveal the engineering behind the system. As it appears, the tanks and other equipment necessary for the system are under the hood. This thing might be very interesting for performing a stunt, but it is useless in the real world.