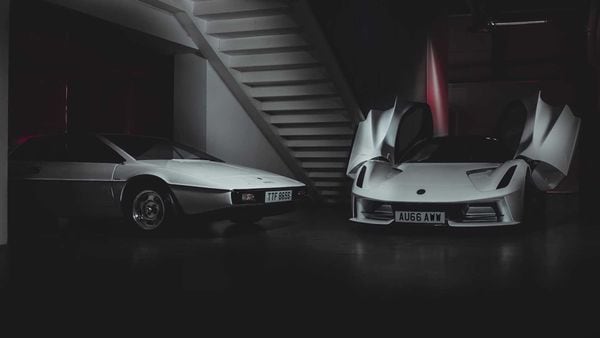 On July 7, 1977, James Bond's The Spy Who Loved Me premiered at Odeon Leicester Square in London. A white Lotus Espirit S1 was the star of the film because of its ability to turn into a submarine.

After 43 years, Lotus' new hypercar, the Evija, was photographed with the 007 Espirit S1 as a small sample of appreciation for one of the most famous cars in the history of cinema.

The Evija marks an exciting new chapter in the history of the British car manufacturer. Looking at the two cars in the same picture standing side by side, it is clear how the design of supercars have come of age in the past few decades. The simple design with a wedge shape and minimalistic styling details of the James Bond car Esprit S1 is in stark contrast to the latest from the Lotus stable. The new Evija hypercar appears more aerodynamic and futuristic.

The old Bond car used to be powered by a 2.0-litre naturally aspirated four-cylinder engine mated to a Citroen-sourced five-speed manual gearbox. It used to produce 160 hp of power.

On the other hand, the new Evija hypercar has four electric motors, producing a total of 1,973 horsepower. Lotus says it accelerates to 100 kmph in less than three seconds, while the top speed will be over 322 kmph. The battery offers about 402 kilometres of range.

Evija may have nothing to do with Esprit S1 from "The Spy Who Loved Me", but it has influences.

In 2013, Elon Musk paid $866,000 for the Esprit S1 from the Bond movie. The following year, Musk said it had developed an amphibious vehicle similar to the Esprit, but it was about 10% larger. In 2017, he reiterated that the plan was to leave the car as it is and create a new vehicle.