Gloster is a premium SUV with MG claiming it will offer powerful drive capabilities coupled with a premium cabin.MG says Gloster will be launched in India later in 2020.
By : Shubhodeep Chakravarty
| Updated on: 07 Feb 2020, 01:01 PM 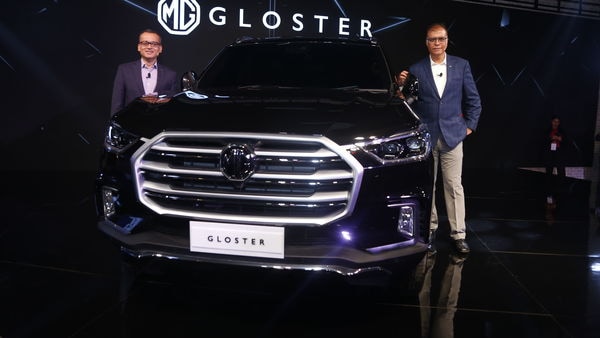 MG Motor on Friday took the covers off of Gloster luxury SUV at Auto Expo 2020. With a clear focus on a product-launch offensive in India, the company said that the imposing vehicle will be launched here at a subsequent date this year.

The Gloster benefits from an imposing body structure which helps it craft a massive road presence. While it gets its name from a British jet-engine aircraft prototype and MG says it pays ode to British engineering, the Gloster seeks to create a fan following courtesy its bold visual aesthetics coupled with a premium cabin space. MG claims that the Gloster will have capable drive dynamics and will offer best-in-class features.

The Gloster, when officially launched, would be MG's first offering in the premium luxury SUV segment. Currently, it offers the Hector SUV and MG ZS EV. Rajeev Chaba, President & Managing Director at MG India, feels the time is right to expand the product portfolio. "The launch of Gloster will mark our entry into the luxury SUV segment. We are confident that, with its best-in-class features, specifications and performance, the Gloster will be a benchmark for luxury SUVs in India with its launch later this year," he said.

MG also showcased its luxury MPV G10 which will fight for space in the people-mover segment of passenger vehicles. The segment currently has several products across varying price bands and the most-recent entrant was Carnival from Kia, launched at Auto Expo at a starting price of ₹24.95 lakh (ex showroom).

Interestingly, MG and Kia made their debut in India around the same time in 2019 with Hector and Seltos being their first offerings, respectively. Despite an overall slowdown in the Indian auto industry, both cars enjoyed considerable success and the waiting period for both further underlined their popularities.

It is possible that both MG and Kia are now looking at expanding their portfolio in the country due to the initial success enjoyed by their debut products. While MG has a manufacturing plant in Gujarat's Halol, Kia recently opened its mega production facility in Andhra Pradesh. Local production helps automakers keep costs in check and offer products at relatively competitive rates.