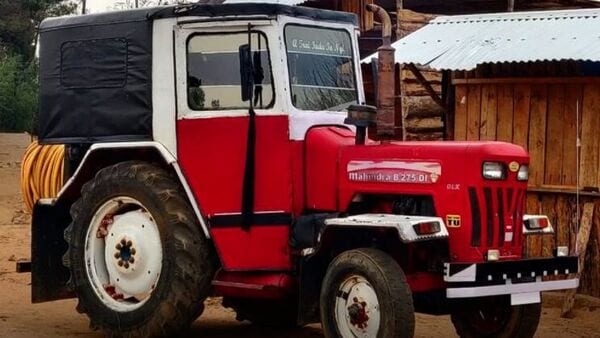 The owner has transformed a Mahindra tractor into a SUV. (Image: Mahindra Tractors)

There are many auto enthusiasts who love to create their own machines or customise their vehicles. One such person is Maia Rymbai from Jowai of Meghalaya, who transformed a Mahindra tractor into a vehicle that is Mahindra Thar lookalike. Mahindra Group chairman Anand Mahindra has shared the image of the vehicle in his Twitter account.

Mahindra also wrote in his tweet that the customised vehicle appears like a strange-looking beast. “Now that’s a strange looking beast…But it looks like a loveable character from a Disney animated film!" Mahindra further added.

Now that’s a strange looking beast…But it looks like a loveable character from a Disney animated film! https://t.co/JBR25yeXKD

As Mahindra Tractors, a wing of Mahindra Group dedicated to making agricultural and farming machineries has revealed, the modified vehicle is built on a Mahindra 275 DI TU tractor. Capable of producing 39 hp of power output, this is one of the bestselling tractors from the company and it is suitable for both agricultural and haulage operations.

Speaking about the vehicle, it comes sporting an odd look due to the massive rear wheel and the small front wheel that has been retained from the original tractor. The owner has customised a cabin on the tractor. To match the massive height different between the front and rear of the tractor, the vehicle gets an odd-looking front door.

A front windshield and driver side and front passenger side window too have been fitted to the cabin. The front fascia of the vehicle is the same as the original tractor. However, the owner has added a front bumper. Mahindra Thar like front wheel covers are there as well, along with side turning indicators. The rear of the vehicle is not visible, but as it appears, it gets a soft top that is retractable. It is not clear if the owner has made any mechanical changes to the tractor.