Kia Carens three-row MPV helped the Korean carmaker to boost its sales in the last five months. Kia sells Seltos and Sonet SUV, Carnival MPV and EV6 among other models in India.
By : HT Auto Desk
| Updated on: 19 Jul 2022, 17:26 PM 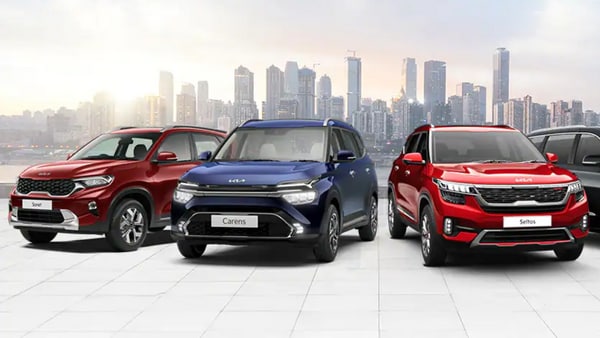 Kia in India has hit a major milestone. The Korean carmaker has sold five lakh cars in the country since it made its debut in 2019 with the Seltos SUV. Kia India has been one of the fastest growing carmaker, which is currently in a tight race with Mahindra and Mahindra to be the country's fourth largest carmaker. Kia's growth in sales can be attributed to Seltos, its first and the best-selling model in India.

Kia's latest three-row model Carens has helped the carmaker to achieve the milestone quicker than expected. Carens boosted Kia's sales in the last five months since its launch in February. It helped Kia sell the last one lakh units in less than five months. Kia also announced that it has manufactured 6,34,224 units from its Anantapur manufacturing facility so far, which also include export units. Kia India contributes more than 6 percent to the global sales of Kia.

Myung-Sik Sohn, Chief Sales Officer, Kia India, said, “In the short 3 years in India, we have not only established ourselves as the trend leading and inspiring brand but have also led the adoption of new technologies. I would like to attribute Kia India’s success to everyone who is and has been a part of the ecosystem. Most importantly, I would like to extend my deepest gratitude towards our customers who have kept their trust in the brand even in adverse situations like the global supply chain issues. I proudly say today that we have earned a space in the hearts of Indian consumers, and that’s our biggest achievement."

Kia Seltos remains the carmaker's best-selling model contributing nearly 60 percent of its overall sales. Seltos is one of the leading models in the compact SUV segment dominated by Korean carmakers. Four out of every 10 compact SUVs sold in India are Seltos. It is placed second to Hyundai Creta currently. Sonet is the second best-selling model which contribute around 32 percent of sales. Carens, launched barely five months, ago is climbing the sales chart and is contributing a healthy 6.5 percent of its overall sales. Carens has 18 percent market share in the three-row vehicle segment dominated by the likes of Maruti Ertiga and Toyota Innova Crysta.

Kia has managed to sell 400 units of Carnival MPV on average every month. The carmaker also recently drove in its first electric car in India with the launch of the EV6. “Recently, we have brought to life our vision of becoming a 'Sustainable Mobility Solutions Provider' brand in India with the launch of EV6 and installing the fastest passenger vehicle charger of 150kWh. Due to our focussed approach, we now contribute more than 6% to Kia's global sales. India is a country with immense potential, and we aim to continue contributing to the growth of manufacturing in India by continuously bringing in our world-class products and technologies," Sohn added.

Kia plans to expand its reach in India 400 dealerships across 225 cities by the end of this year.