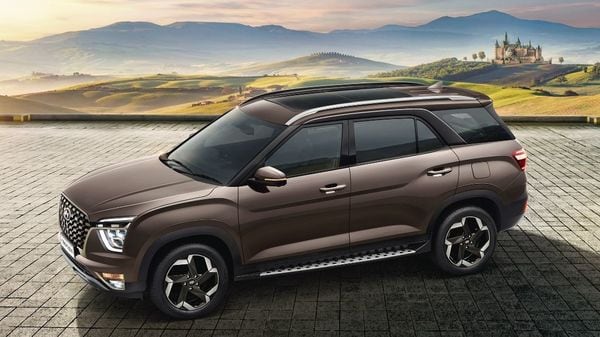 Hyundai Motor India Limited has introduced its latest offering Alcazar SUV at a price range of ₹16.30-20 lakh (ex-showroom). The three-row seater SUV competes with rivals like Tata Safari and MG Hector Plus. The all-new Hyundai Alcazar's base price is higher than its two rivals. The Safari comes priced between ₹14.99- ₹21.81 lakh (ex-showroom), while Hector Plus is priced at ₹13.62- ₹19.60 lakh (ex-showroom).

Hyundai Alcazar's base trim Prestige is ₹1.30 lakh more expensive than Safari's base variant and ₹2.70 lakh costlier than MG Hector Plus's base model. Usually, the new cars take the competitive pricing route when they are first launched. In this case, Alcazar has been priced higher than its two rivals.

This is a new strategy Hyundai has taken. As the South Korean auto major said, the Alcazar customers would expect this premium SUV to get numerous features in all the variants. This is why Hyundai has decided to not have a no-frills base variant for the Alcazar, revealed Tarun Garg, Director for Sales, Marketing and Service at Hyundai India. "It is a move away from what we usually offer because Alcazar customer would want a feature-rich car right from the first of three variants," Garg further added.

The reason lies in the feature list of the new SUV. Hyundai seems to have taken a strategy to offer as many features as possible even in the base trim. This is something the automakers avoid in an attempt to lure the buyers to purchase higher trims of the cars on offer.

Hyundai usually takes the strategy to bring new models with four variants. The second lower variant comes loaded with a host of features compared to the feature-scarce base model.

In this case, Hyundai introduced only three variants - Prestige, Platinum and Signature. The Prestige variant gets a host of creature comfort features, safety features as standard.

In terms of creature comfort features, the Alcazar gets a 10.25-inch touchscreen infotainment system with BlueLink connectivity, panoramic sunroof, cooled glovebox, wireless charging, cruise control, etc. These are not the features that are usually available in base models of the cars. Also, the SUV is available in both six and seven-seater options, accomodating more space and comfort for the occupants.

Will this strategy pay off?

Indian customers are now more open to the higher trims of the cars that come with a feature-rich package. The higher variants that come loaded with features attract more buyers than their base variant siblings.

Hyundai has taken the strategy to not offer a no-frill base variant considering this fact. This is why the South Korean auto giant didn't opt for a four variant strategy for Alcazar like the rest of the lineup. However, only time will tell if this strategy will pay off or not.