While what took place at Tesla's California Supercharger station could be an act of vandalism, the primary goal was most likely to steal the cable for the copper inside.
By : HT Auto Desk
| Updated on: 08 Feb 2022, 06:08 PM 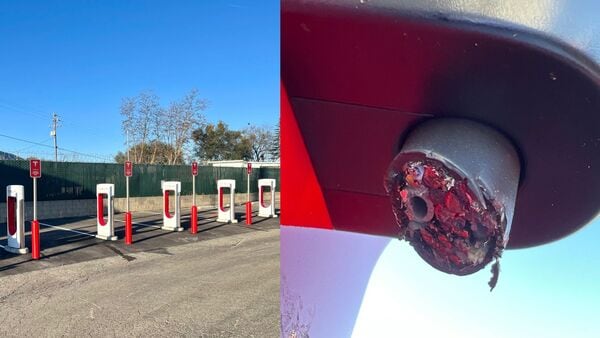 The vandalism can pose a big issue in the future as well, especially as most charging stations are unattended.

A brand new Tesla Supercharging station in California recently became a victim of theft as all the eights cables installed were cut off and the EV company had to shut the station for public use, Electrek reported, citing Tesla Motors Club. The charging station in Oakhurst is a new eight-stall V3 Supercharger station.

As per a closer examination of the charging stalls by members of the Tesla Motors Club, all the cables were completely cut off, which could also be an act of vandalism. Some Tesla Supercharging stations in the past have been subject to vandalism. For example, a Supercharger station in Utah was shut down a few years ago after people intentionally caused damage to it.

While what took place in California could be an act of vandalism, the primary goal was most likely to steal the cable for the copper inside. The neatness with which all the eight wires were cut off undetected makes it seem that the criminals knew exactly what they were doing and how to go about it.

This can pose a big issue in the future as well, especially as most charging stations are unattended. This implies that charging station operators will have to start taking vandalism and theft more seriously and into account for their operations to keep the stations online as much as possible. They could even look at investing in some surveillance equipment.