TVS Ronin comes out as a hybrid cruiser that doesn't follow the traditional biking rules. With its smooth powertrain, solid ride and fair pricing, Ronin is all geared up to set the segment on fire.
By : Prashant Singh
| Updated on: 09 Jul 2022, 14:32 PM 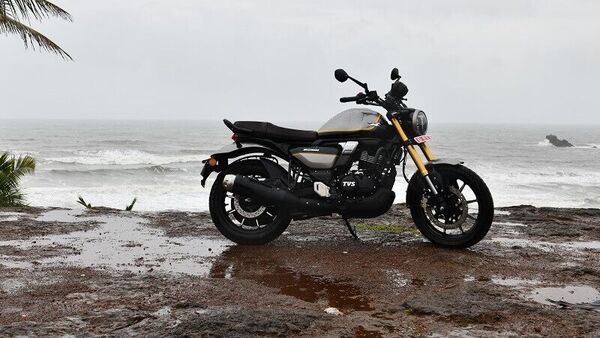 TVS Ronin is an all-new product from the Hosur-based automaker.

With the evolving market trends and changing customer buying preferences, it isn't really a surprise to see TVS hopping on the cruiser/neo-retro bandwagon, especially after it has previously shown interest by showcasing the Zeppelin R cruiser at the Auto Expo. But what's actually surprising was the extent to which the company had changed the concept behind the Zeppelin to Ronin. When the Ronin was rolled out, TVS clearly announced that it doesn't have a segment of its own. But it does, and it is so apparent what TVS is trying to pull off with this model and set the of riders it is aiming to attract.

So what is Ronin? Google says it stands for a Samurai with no lord or master, however, in modern Japanese usage, usually, the term is used to describe a salaryman who is unemployed. Though the nameplate sure is cool, I am unsure which ones of these definitions relate to the TVS Ronin. And here's why.

On the outside, Ronin benefits from clean body lines that give it a very mature look. Take a step back to admire the silhouette of the bike which gives pure retro vibes although I wouldn't call it a retro, a pure cruiser, or anything of that sort. Ronin has a unique identity, it's like it packs in all the right classic elements and infuses it with modernity plus a pinch of chemical X. And all of this comes together to give the Ronin a likable, premium-looking design. 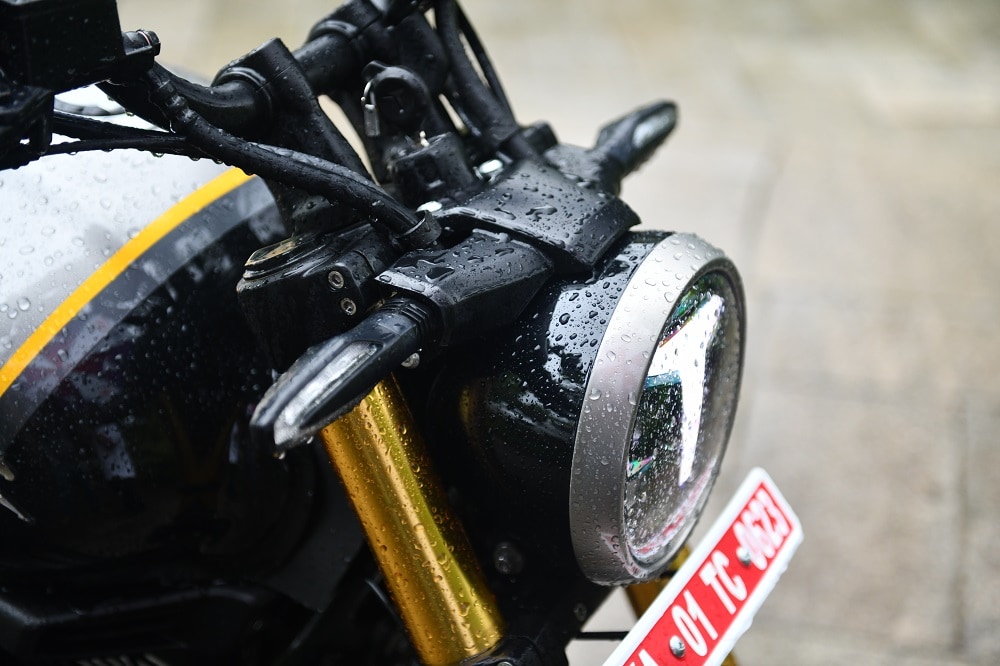 Ronin has a unique identity, it's like it packs in all the right classic elements and infuses it with modernity plus a pinch of chemical X.

The front features a typical circular headlamp embedded with a bright T-shaped LED DRL. This design gives its front fascia a high-end bike look and it is flanked with sleek, quality LED indicators. But what really gives the Ronin an intimidating appeal is the use of a fat, golden-dipped front fork. That said, the fuel tank on the bike sits as a sculpted unit which adds to its width and masculinity. Also, the company has made use of some especially smart colours for a youthful appearance.

The single seat on the bike gets a tuck-in design and a brown leather shade which is again a thoughtful touch on the bike. However, there are some plasticky elements added to the side body of the bike that might not go down well with some buyers. Also, the use of a single rod-type grab rail isn't something that I am a big fan of on the Ronin. That said, the rest of the details look neatly designed including the use of a sleek LED tail lamp, and a length-extending rear fender that not also looks good, but is also purposeful, especially when riding on wet roads.

Step on the rider's seat and you can't help admiring its offset, scrambler-inspired single digital cluster that, as per TVS, has been thoughtfully placed. But I reckon the only thought behind this cluster was to make it look cool. Turn the key on and the LCD screen comes to life as a black and white unit, but displays a host of information including ABS driving modes, ride data, and connectivity notifications, apart from the regular informatics such as speed, time, rpm, and gears. This screen can also be connected to the user's smartphone and also gets smart voice assist. Step on the rider's seat and you can't help admiring its offset, scrambler-inspired single digital cluster on the Ronin.

How about the powertrain?

TVS already has a range of powertrains, and platforms that it could've clubbed to save development costs. But no, it invested in a completely new 225 cc unit that could underpin its Ronin brand. The result is a 225.9 cc, single-cylinder unit that pumps out close to 20bhp and 19.93 Nm. The moto behind the development of this unit was to create something with a character of its own. And that is why engines from the Apache series were kept at bay. TVS focused on coming up with an engine that could feel relaxed irrespective of the riding conditions and speed. And that it did manage to achieve with this unit.

With strong low-end and mid-range response, this unit feels quick, not just for the city but also on open highways. The flat torque curve is also evident and there is oodles of torque present, especially in the first half of the rev range. But what I couldn't stop smiling about was how easy and stress-free this engine remains irrespective of what speeds you are on. Also, even higher in the range, it manages to remain calm and vibration-free. There is no rattle, no noise from the engine or body parts, not even from foot pegs when the revved hard. I think it remains one of the smoothest bikes to be even rolled out from TVS, and I wouldn't mind being quoted on this.

The transmission, a 5-speed unit gets a slipper clutch and assist function. The shifts are smooth, but I would like to get this bike on road for a longer duration before commenting on the gearbox. However, the ratios are placed well, and you don't have to continuously shift to remain in the power band. 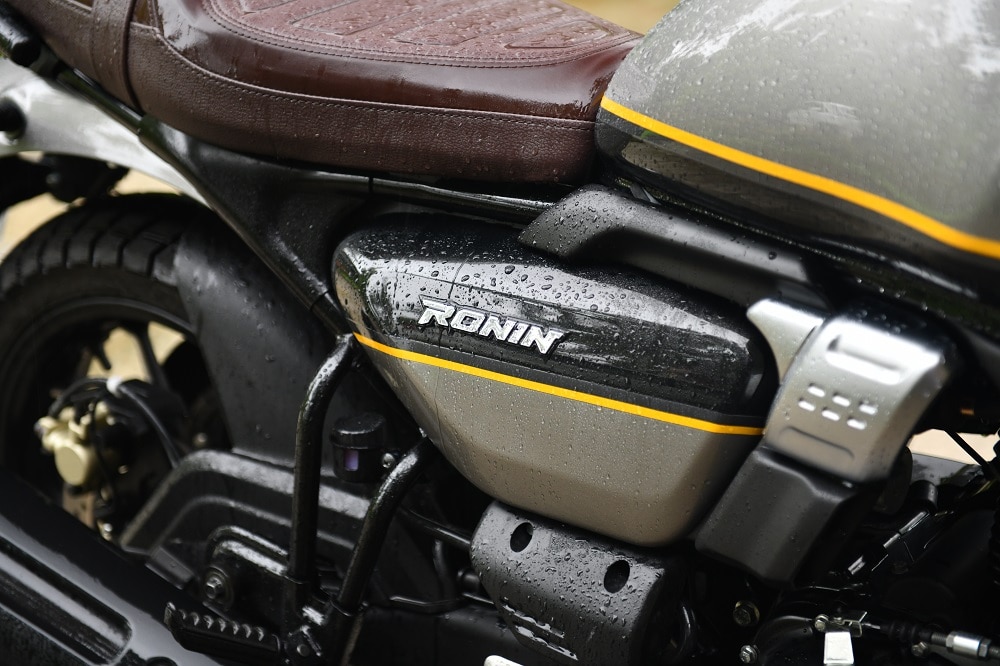 With strong low-end and mid-range response, the 225 cc unit on the Ronin feels quick, not just for the city but also on open highways.

But is it comfortable?

Hop on the Ronin, and you see yourself sitting on something like a scrambler because of its handlebar position which is wide, relatively flat, and has a good reach too. However, put the feet on the pegs which are stretched forward and you'll figure out why you can't ride it like a scrambler. Out on the road, the ergonomics aren't actually bad. The seat is wide enough and also well padded, and I also didn't feel any pressure points on the limited saddle time I managed on the Ronin. But being a cruiser-oriented model, the best way to check out the same will only be a much longer ride.

Does it handle well?

The Ronin isn't supposed to dig deep in corners, being a cruiser it should remain planted and not feel heavy. And I think, I've already summed up what Ronin is all about even before starting.

The slightly relaxed front rake along with, fat rubber and a tad long wheelbase give the Ronin a stable feel over asphalt. The suspension also works well in providing stability and soaking up undulations. However, Goan roads were in good shape so the bumps-soaking ability of Ronin's suspension still remains to be tested on a thorough road test review. But the overall setup works fairly well on the corners as the bike sticks to the ground and lets the rider be at ease, without any drama.

Don't expect the Ronin to be lighting quick around turns, it is not, because it is not designed for that. However, it still handles very well for what it is.

As far as off-roading goes, Ronin is capable of going off the road, but it's not an off-roader. High ground clearance, underbelly protector, meaty rubber, and sorted suspension gives the Ronin a rugged appearance but do not expect to stand on the bike, hitting the highs-speed trails as front stretched foot pegs won't even allow you to stand up properly.

Hit the brakes, and the dual-channel ABS (on the top trim) keeps you from hitting the ground. The tested bikes were fairly new and yet on break-in period, and so were the brakes pads which need at least a good 300-400 km of riding to get fully functional. So I am assuming that heavy rains, muck and slush, and no break-in period were some factors that resulted in a slightly lighter feel on the brake levers.

TVS Ronin is a thoughtfully put-together model which doesn't follow the traditionally set biking rules. It aims to merge genres and create waves with every unique bit it offers. At a starting price of ₹1.49 lakh (ex-showroom), the Ronin comes out as not just a well-engineered product, but also placed very smartly, undercutting the segment rivals such as Royal Enfield Classic 350 and Honda H'Ness CB 350 by a fair margin.