Maruti Suzuki Alto K10 is determined to build on its record sales numbers but can it cater to an evolving and more aspirational nature of the Indian car buyer?
By : Shubhodeep Chakravarty
| Updated on: 24 Aug 2022, 16:48 PM
The latest 2022 Maruti Suzuki Alto K10 builds on its inherent strengths while offering several updates.
View all Images

1/9
Maruti Suzuki Alto K10 was updated earlier in August in a bid to further attract potential first-time car buyers. Complete with design updates and more features, the latest Alto K10 is looking to build on its record sales numbers.

2/9
The Alto 800 and Alto K10 have been power players in the domestic car market in India. Over 43 lakh units of the model have been sold since Alto was introduced here back in 2000.

3/9
The latest Alto K10 continues to derive power from a 1,000 cc petrol motor which is paired with a familiar five-speed MT and an AGS unit.

4/9
There are some very significant design updates on the newest Alto K10, primarily on its face. The grille is now far bigger than before and has a honeycomb design pattern. The headlight units are smaller but sleeker and there are no provisions for fog light placement.

5/9
The Alto continues to stand on 13-inch wheels and honeycomb pattern now also finds a place on the wheel cap.

6/9
The rear of the new Alto K10 gets reworked tail lights.

7/9
The Alto K10 gets a seven-inch infotainment screen which is powered by SmartPlay Studio and comes complete with smartphone navigation. There are steering-mounted controls and a digital driver display. There is not much that has changed in terms of passenger space.

8/9
The Alto K10 remains a very familiar car to drive with its K-series engine giving it a whole lot of spunk.

9/9
While there is a lot of body roll still, the AGS option continues to make big sense in a car that would primarily do city rounds.

Maruti Suzuki Alto was first launched in 2000 and quickly replaced Maruti 800 as the most common car on Indian roads. A model that needs absolutely no introduction wherever one might be across the lengths and breadths of our country, the Alto has found over 43 lakh homes over the course of the past 22 years, a record. Widely regarded as the true people's car, the Maruti Suzuki Alto did - and continues to do - what Tata Nado couldn't - take the joy of four-wheeled mobility to the masses. While this isn't an Alto versus Nano insight, it is safe to say that while Tata focused on propping Nano as the cheapest car money can buy, Maruti Suzuki continues to focus on Alto has the most bang-for-the-buck product. And in this sense, the latest 2022 Maruti Suzuki Alto K10 underlines its inherent strengths while offering several updates.

A big part of why Alto K10 remains a best-seller despite being a vastly common car is that Maruti Suzuki has given it timely updates while only minutely tweaking the lively 1,000 cc motor under the hood. When it comes to this particular offering, Maruti has appears to have followed a ‘don’t fix what's not broken' philosophy and thus far, it seems to have worked real well.

But just because the Alto sells like hot cakes here does not exactly guarantee a similar momentum in times to come, especially with the Indian car-buying audience becoming increasingly aspirational regardless of budget. While it is true that there still is a mammoth potential for passenger vehicle penetration here, sitting on past laurels and repute could be a risky proposition.

Do the slew of updates then promise a path of further progress? Here's our first full-drive review of Maruti Suzuki Alto K10:

The Alto was never designed to win any beauty pageants for cars. It still won't. But marks due for a fresh face and rear that seek to set it apart from the preceding models.

The front grille, for instance, is now much larger than before and sports a honey-comb pattern. Flanking it on either side are smaller but sleeker halogen head light units. Interestingly, Maruti Suzuki has completely omitted the section for fog lamps. 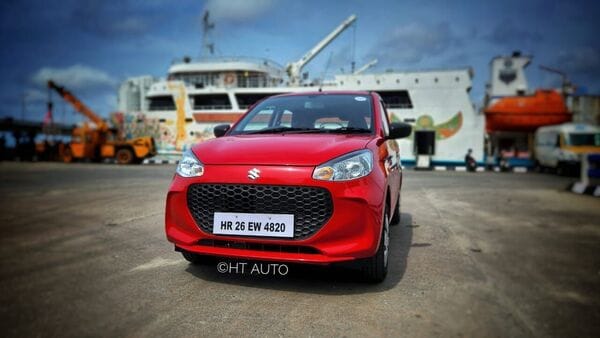 The Alto’s design has undergone small but significant changes which now takes it closer to how the new Celerio looks. There may not be much change in terms of proportions but the face is significantly different courtesy a larger grille with a honeycomb pattern. The halogen headlight units on either side are now slightly smaller, more sleeker than before. And no, there is no provision for fog light units.

Over at the side, the Alto continues to stand on 13-inch wheels and look closer to find the honeycomb pattern now also finding a place on the wheel cap. There is a stretched character line running from the A pillar to the rear light and another raised character line on the lower half. Unlike the previous model though, there is no black cladding line on the side doors. 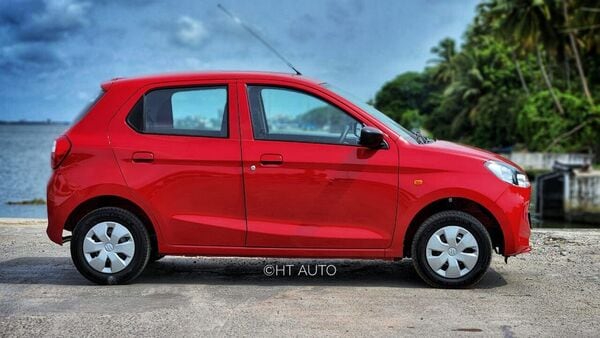 The Alto continues to stand on 13-inch wheels and honeycomb pattern now also finds a place on the wheel cap.

The rear of the new Alto K10 gets reworked tail lights while the design of the trunk door and rear bumper too have been tweaked for a newer take from the back. 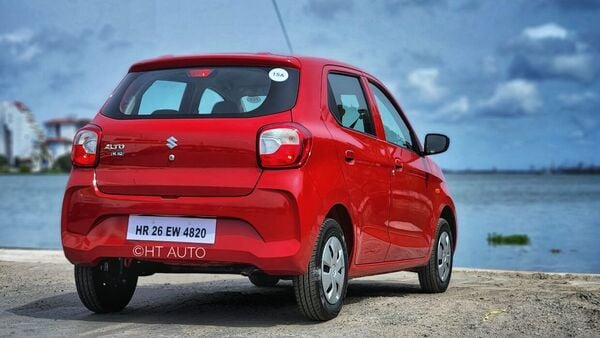 The rear of the new Alto K10 gets reworked tail lights.

There is nothing really remarkable in the design updates on the new Alto K10 but while customers in this segment may not exactly prioritize looks, Maruti designers could have made the updated model sharper rather than more rounded, almost on similar lines at the updated Celerio. And while Maruti Suzuki is offering two customization packs - Impacto and Glinto, these don't do much to bring out the wow factor.

As far as body colour options are concerned, there are six hues to choose from.

Now while not much has changed in terms of proportions of the new Alto K10, there is slightly more space for rear-seat passengers, especially the legroom. It is only marginal and on obvious lines, three at the back would still be a tight squeeze.

But there are other highlights on the newer model to now look forward to. The biggest update, and by far, is the addition of a seven-inch infotainment screen on the top-end variant. Powered by SmartPlay Studio and complete with smartphone navigation, the display is as bright and as responsive to touch as on any other Maruti Suzuki model. There is support for Android Auto and Apple CarPlay and voice command integration as well. The unit is connected to four speakers, one on each door. The Alto K10 infotainment screen is powered by SmartPlay Studio and comes complete with smartphone navigation.

Then there is the large driver display screen which puts out the necessary information in an all-digital format. It isn't fancy but the large font for the speed makes the glance from the road to the screen and back on to the road quite easy. But because this display is quite large, it also looks rather empty as only the most essential details are displayed and the right and left sections are blank. 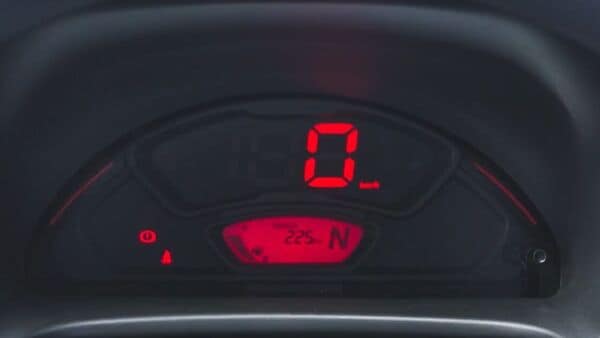 The large driver display screen puts out the necessary information in an all-digital format.

The steering wheel is another update point and is now larger, and comes with mounted controls.

The Alto continues to offer an acceptable list of storage spaces, two cup holders on the center console, circular air vents on the side - the air-conditioning is mighty powerful, and device charging options.

But while the upholstery and cushioning on all seats are par for the course for this segment, the finish on some of the panels were quite shoddy and may eventually give way with passing time. This is especially true for the panel lining between the front windows and the roof.

The Alto K10 has always been a delightful little car within city limits and the 2022 model stays true to this as well. The 1,000cc K-Series dual jet petrol motor has been slightly reworked to give it a slight bit more character and this is paired to very familiar five-speed manual and an AGS (Automatic Gear Shift) transmission options. 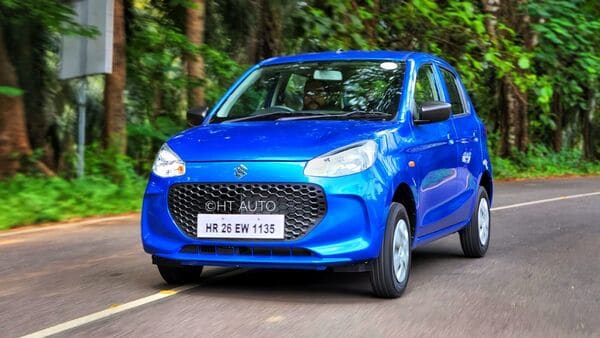 For anyone who has driven an Alto, there isn't much new to delight but this once again is an example of the ‘don’t fix what's…' philosophy.

We began our drive from the outskirts of Cochin, making our way through congested city sections before heading out to Athirapally waterfalls, a total drive day distance of around 200 kms. On expected lines, the Alto fared remarkably well through the congested sections with its light steering set up making it easy to navigate through the narrow roads. The gear shifts too were conventional in the manual set up and once the roads cleared, the Alto pushed forward like an innocent child in a chocolate factory. The three-digit mark does take a while to come about but hey, the engine deserves all the credit for keep things interesting to and beyond. The Alto continues to offer an acceptable list of storage spaces.

The suspension didn't seem to have been updated and one would feel vibrations on broken roads. The body roll too is still mighty evident on sharp or sweeping turns. But keep the Alto steady - and moderate your expectations, and Alto will reward you with an eager drive.

But while the MT is fairly easy to handle, the AGS would surely be my go-to option because it remains a very practical addition on the Alto. There's nothing new as such and the shifts aren't exactly fluid. But for the segment in which Alto features in, it is always good to have a an auto transmission choice that can make managing congested roads far easier. In the entry-level play field, the 2022 Alto K10 will lock horns with sibling S-Presso and Renault Kwid.

The Alto K10 benefits big time on two counts - it is a well-established, well-entrenched package which is backed by a robust sales and post-sales network. And then there is the abject surrender of rivals in the segment like Hyundai Santro - taken out of production, and Datsun rediGo. This leaves the entry-level playfield wide open for the likes of Alto to compete against sibling S-Presso and the much more stylish looking Renault Kwid.

The latest Alto K10 isn't young and its latest styling updates aren't exactly too striking either. But as an overall package, the Alto is quite the unbeatable option that now has even bigger potential for a bigger chunk in the entry-level segment.