Data from the Chinese Association of Automobile Manufacturers (CAAM) reveal that 2.52 million vehicles were sold last month in the country.
By : HT Auto Desk
| Updated on: 10 Dec 2021, 12:52 PM 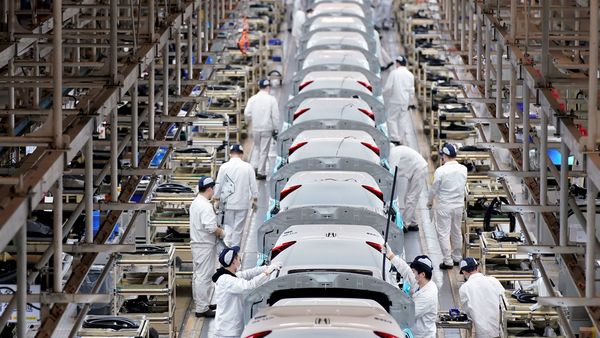 File photo of Dongfeng Honda factory in Wuhan. Image has been used for representational purpose.

The global semiconductor shortage is continuing to have a crippling effect on auto markets across the world and the hurt is perhaps being most felt in China, the world's largest car market. Sales in November here fell by as much as 9.1% as per latest industry data.

Data from the Chinese Association of Automobile Manufacturers (CAAM) reveal that 2.52 million vehicles were sold last month in the country. While the figure on its own may appear significant, this a noticeably lower than sales in the same month of 2020. But expectations were that the fall would be steeper than what it eventually was.

While semiconductor shortage issue is likely to persist and continue posing mammoth challenges, there are positive takeaways as well. Sales of new energy vehicles - the term used in China for fully electric, hybrid and hydrogen vehicles - is maintaining its upward trajectory. November saw 450,000 units of such vehicles being sold, up 121%. Growing list of options and a push at government level to popularize such vehicles is continuing to help matters, say experts.

What is also expected to help automakers is falling prices of raw materials and the problem of power shortage from prior months easing off. With demand high, the question that remains is if supply-chain and production-related matters can be sorted out.

Fortunes of automakers in China, more often than not, tend to have a deep impact on their global plans. The country is a major volume driver in terms of sales for almost every major automotive brand which also has to compete with a long list of local players.