Women chauffeurs drive change, one ride at a time 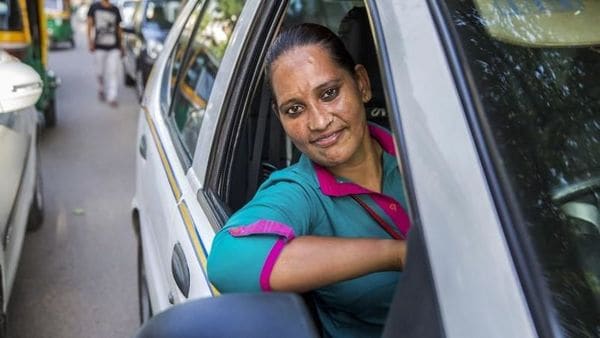 In this undated photo a woman chauffeur employed at Delhi-based Azad foundation's driving a car. Driven by financial need and sometimes to just look for fresh career opportunities the women are cutting through gender barriers to ensure they steer the course of their lives and also stay the course. (Photo | PTI)

Determined to be the drivers of their lives, a growing number of women are traversing a tough road to empowerment by becoming professional chauffeurs -- of cars, two-wheelers and even buses.

Driven by financial need and sometimes to just look for fresh career opportunities, the women are cutting through gender barriers to ensure they steer the course of their lives, and also stay the course.

And sometimes they script stories of remarkable resilience and liberation.

Like Gulesh Chauhan, a driver with ride-hailing company Uber, who found herself at the crossroads after her husband passed away in 2007.

The woman, who had never stepped out in public without a veil, did not just have to cope with her loss but also the pressure of supporting herself and her then nine-year old son.

She said she struggled to make ends meet for five years with menial jobs at neighbourhood departmental stores. And then in 2012, her mother and son advised her to drive a car and turned her life around.

"I cannot express in words how it feels. For the longest time I had never even sat beside a man except my husband, and now I drive young men and women around dropping them to their destinations," the now professional driver told PTI with pride.

She has been working with Uber for four years and drives on multiple routes between Gurgaon and Noida, managing to make nearly ₹2,000 everyday.

"I am happy the difficult days are behind me. But, more importantly, I am extremely proud of having overcome my own fears," the 43-year-old said.

Stories like Gulesh's are, however, just the beginning, the first steps towards changing the scenario -- one statistic at a time.

According to the Road Transport Yearbook for 2015-16 (the latest such report brought out by the Ministry of Road Transport and Highways), women counted for only 1.5 crore of the over 16 crore valid drivers' licences issued across the country as on March 31, 2016.

Of these 1.5 crore women, only 17.73 per cent drive professionally.

No wonder Waled Aadnan was "pleasantly surprised" when he found a woman driving him on one of his Uber rides.

"I was pleasantly surprised to begin with. That only gave way to an appreciation of how truly path-breaking her role in society is, she is changing perceptions of gender roles with every ride, meeting myriad people and challenging deep-seated beliefs," the 28-year-old risk analyst said.

This is not just a big city phenomenon. Women in smaller towns are also beginning to 'drive' the path towards change.

The 42-year-old has been a partner driver with Indian transportation network company Ola for the last three months.

A company spokesperson said they had witnessed a significant increase in the number of women fleet operators over the last few years across four, three and two-wheelers.

Sushmita drives for two hours everyday, ferrying both male and female passengers, between 7 pm and 9 pm when her 12-year-old daughter is at tuition.

The road to becoming financially independent is never easy, especially for a woman, she said.

"Initially, my husband got very angry at the idea. But when our neighbours started appreciating my job, he came onboard," Sushmita told PTI.

"I did not take up the job for the money, but because I was bored when my daughter was away. But now it really makes me happy to be able to give my child something from my own money. This birthday I gave her a tripod because she is interested in photography," she said.

Sushmita said she would be happier if she could inspire other women to do the same.

There are no precise numbers for exactly how many professional women drivers there are with both Ola and Uber declining to give details.

Contributing to the cause of making the country safer for women, while providing livelihoods for resource-poor women in the country is Delhi-based NGO Azad foundation.

Under its 'Women on Wheels' programme, the foundation aims to empower women with minimal economic and social capital to become professional drivers.

Susmitha Alva from the foundation said it has trained at least 2,000 women to become professional drivers since its inception in 2008. It has employed 1,000 of them at their sister for-profit organisation Sakha Consulting Wings Private Limited that provides "safe transport solutions for women by women".

"More than 400 women trained by Azad Foundation that we know of are currently practising as professional drivers in the cities where we work (Delhi NCR, Jaipur and Kolkata)," she said.

V Saritha from a remote village in Telangana is one of them.

Having trained and worked at Azad Foundation for nearly five years, she is the first and the only woman bus driver with Delhi Transport Corporation (DTC).

The 36-year-old has been with the bus service provider since 2015, and currently drives bus number 392 that plies between Dhaula Kuan and Noida Sector 62.

Saritha, who was earlier a luxury car chauffeur with Azad Foundation, said four years of driving a heavy vehicle has started taking a toll on her health. And with her income depending on the number of kilometres she drives daily, she barely manages to make enough to support herself and her ageing parents back home.

But she doesn't want to quit yet.

"The work with the foundation was more comfortable, and perhaps I will eventually go back to work there. But, it isn't time yet. I feel if I quit, people will say I couldn't handle the pressure because I am a woman.

"Also four years back when I joined DTC, I opened a door for women to be part of this world. I don't want to close that door. I will leave when more women join here," Saritha said.

Safety is an issue.

While many women customers feel safe when they see a woman chauffeuring them around, women drivers also need to be made secure.

"Besides imparting the training to drive a car, the foundation also trains the women to address technical glitches with the vehicle on the road. To ensure their safety, we have collaborated with the Delhi Police to train them in self-defence," Susmitha from the Foundation said.