Home Auto News Watch: Why Tesla's 'sentry Mode' Is A Blessing For Owners, Bane For Miscreants

Watch: Why Tesla's 'Sentry Mode' is a blessing for owners, bane for miscreants

Tesla had introduced 'Sentry Mode' in some of its cars, including Model 3, in 2019 as a safety feature when the owner of the vehicle is not in close range.Tesla believes this can act as a deterrent for miscreants.
By : HT Auto Desk
| Written By : Shubhodeep Chakravarty
| Updated on: 20 Jan 2020, 12:01 PM 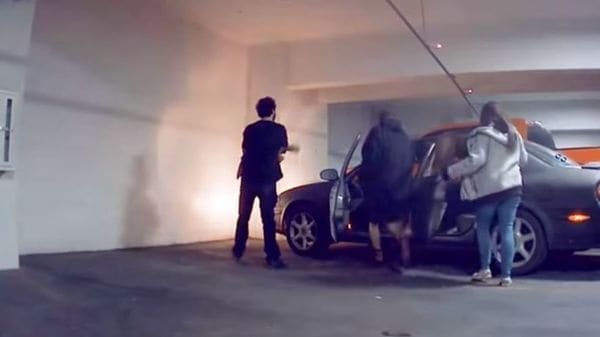 Screen grab from a video posted on Youtube by Fernando C

Ever wondered about the risks involved in leaving your electric car plugged in for long periods in public spaces? After all, charging electric cars, most of which come at a premium price, at public spaces is not as simple as driving into a fuel station and moving out within minutes. That is exactly where Tesla's 'Sentry Mode' comes into play and can be quite the 'carsaver' when needed.

A recent video posted on Youtube gave an insight into the abilities of a Tesla Model 3 to fend for itself even when its human master is not around. In the video, which has been viewed more than a million times since it was posted on January 10, two people can be seen kicking the charging port of the car - for no apparent reason. Sensing the threat, the Tesla Model 3 activated 'Sentry Mode' and it begins to flash emergency lights and issue blaring alarms. The video was shot by a camera on the Tesla Model 3 which also captured the identity of the two accused. "Our model 3 was able to alert us that someone was tampering with the vehicle at 2am in Vegas. I had Sentry Mode on and it recorded these individuals trying to break off the charging plug," the person who posted the video wrote in the caption. "I was able to report and send this to Park MGM Security. Technology is kind of cool!"

Many commented on the video and their views ranged from admonishing the two accused to hailing Tesla's 'Sentry Mode'.

Tesla had introduced 'Sentry Mode' in some of its cars, including Model 3, in 2019 as a safety feature when the owner of the vehicle is not in close range. The feature was primarily designed to dissuade anyone who may be trying to damage either the car or the charging port. When activated, the mode allows for the Tesla car's touchscreen lights up, warning lights flash, alarm rings and - and this is the most unique part, music begins playing at full volume.

Tesla has been working hard to equip its cars with a number of technological features which make them capable on their own and compatible with the needs of owners. The company recently invited hackers to try and hack into Model 3 software, even promising a monetary reward and a free car if they succeed. Tesla said it would help it make its software system even more robust.