Home Auto News Watch: This Sedan With 14 Wheels May Not Be The Car Of Your Dreams

Watch: This sedan with 14 wheels may not be the car of your dreams

A team of car enthusiasts has converted a Lada sedan that features 14 wheels with multiple axles.They also replaced that original engine of the car with a Toyota diesel unit.
By : HT Auto Desk
| Updated on: 03 Oct 2021, 04:53 PM 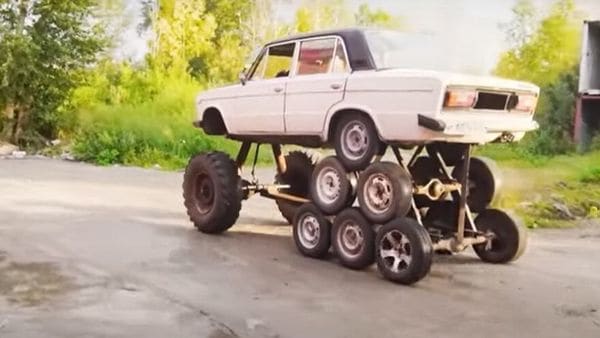 Screengrab from the video posted on YouTube by Garage 54.

Sky is the limit when it comes to tuning vehicles nowadays. And this has been proved by a video that has been shared on YouTube which shows a Lada sedan sporting not four or six but 14 wheels. The team of YouTube channel Garage 54 is behind the conversion and the tuned model looks so bizarre that one might take some time to absorb what is happening.

The video shows a Lada sedan moving with the help of its rear axle. In this case, axels which are about six in number stacked one upon the other in the shape of a pyramid. The team also replaced the original engine of the car with a Toyota diesel engine so that the converted model boasts a better torque.

When the creators tested the model it was observed that there was slippage when the tires became wet, though the steering wheel worked quite smoothly. However, a report by Motor1 mentioned that the converted car did not feature a thorough suspension. This might be because of the multi-axle construction that didn't allow the makers to add dampening while tuning the car.

The video received quite interesting comments and people praised the efforts of the team behind this monster project. One said that a production model of this vehicle might burn a hole in the pocket whereas many expressed their interest in owning such a creation. One also suggested applying the same mechanism at the front of the car as well.

(Also read | This custom widebody vehicle has 2 steering wheels and 2 engines, does donuts)

If anyone is wondering if this is the team's first weird creation, then here is a surprise. The makers earlier converted a Fiat Uno into an eight-wheel model. This served as an inspiration for the 14-wheel Lada sedan, stated the report.