Home Auto News Watch: This Multi Car Collision Underlines Why Hazard Lights Are A Must

Watch: This multi-car collision underlines why hazard lights are a must

A video from a freeway in California once again underlines the need to switch on hazard lights in case of emergency situations.
By : HT Auto Desk
| Updated on: 10 Dec 2021, 11:32 AM 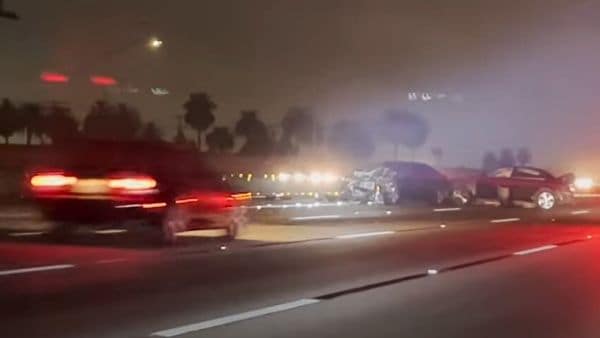 Screengrab from the video posted on YouTube by ONSCENE TV.

In yet another sorry example that not much attention may be given to where and how a car is parked on highways, a video of a multi-car collision in California has surfaced online. The video clip shows a parked - possibly faulty - Nissan Altima standing still before being hit from the back by another vehicle.

It is reported that the person who made the video was trying to warn motorists about the stationery Altima on the road, but to no avail. What also didn't help matters was that the Altima did not have its hazard lights on, a warning sign that could have alerted other motorists.

As a result, a high-speed vehicle crashed into the Nissan.  A few other cars carefully avoided the accident scene though one was unsuccessful and swerved to crash down the road. In all, as many as six vehicles are reported to have been involved in the accident.

The emergency team arrived at the scene and while many of the vehicles were in shattered state,  there has been no report of any serious injuries or fatalities. Local reports state two people were taken to the hospital.

The video received many concerned comments and a few shared how important it is to stay alert while driving on a freeway. One stated that a driver while on a freeway should observe and be of utmost alert of all of his or her surroundings and not only take into account what is happening right at the front. However, it is being widely agreed that hazard lights of the Nissan Altima would have saved the situation from going drastic.