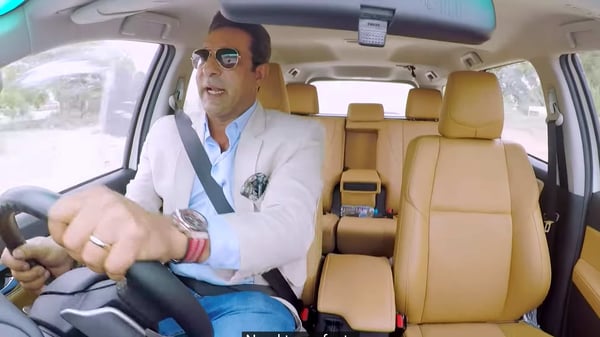 Screengrab from the Toyota video showing Wasim Akram at the wheels of a Fortuner SUV on an off-road track. (Photo courtesy: YouTube)

Former Pakistan cricket captain Wasim Akram is known for his wizardry with the ball and is nicknamed the 'Sultan of Swing'. But very few knew about his skills behind the wheels. Toyota Pakistan decided to show this unseen side of Wasim Akram in a video where he had to tackle difficult off-road terrain in a Toyota Fortuner SUV.

The video, part of a series called Steering with the Stars, captured Wasim Akram on an off-road track in Pakistan as part of the challenge to prominent personalities to go to the extreme on wheels. Akram made it to the finish line in less time than all the previous participants in this particular video series.

The video shows Akram switching between 4-High and 4-Low modes in the Toyota Fortuner quite easily to tackle the challenges thrown at him. He is seen crossing over the broken stone obstacle challenge with a smile on his face. Akram is also seen engaging the hill assist control ahead of climbing a steep obstacle as part of the challenge.

Rock, mud and dust done and dusted, Akram waded the Fortuner SUV through water with comfort as well, and finished his lap in just one minute 46 seconds.

Akram, who is now a professional commentator at cricketing events, is also seen commentating from behind the wheels of the Fortuner as enjoyed his drive through obstacles. So much so, that he even refused to hand over the Fortuner back to the show's host. He admitted that, besides bowling in cricket, he never had experienced such thrill ever in his life.

In India, Toyota recently launched the new facelift version of the Fortuner SUV along with the Fortuner Legender variant. The Fortuner SUV is offered with two engine options that include a 2.8-litre diesel unit and a 2.7-litre petrol motor. The diesel engine is capable of churning out 201 bhp of power and has 500 Nm of peak torque, while the petrol mill is capable of producing 164 bhp of power and 245 Nm of peak torque. Both engines come mated to either a six-speed manual or a six-speed sequential automatic gearboxes.