The Batman movie is said to have used at least four examples of the new Batmobile while being shot, of which three have been displayed at special events ahead of the release of the movie on March 4.
By : HT Auto Desk
| Updated on: 01 Mar 2022, 11:10 AM 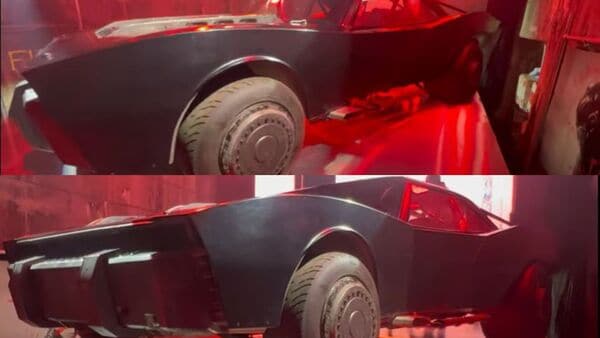 Screengrab of a video posted on YouTube showing off the real Batmobile at a Batman event.

Until now, we have seen the new Batmobile either in the trailers and teasers of the upcoming Robert Pattinson-starrer movie - The Batman or as toy versions. But a new video that has surfaced on the internet shows the real Batmobile displayed at a special Batman event in London, UK.

Warners Bros, the distributer of the 2022 The Batman movie, is said to have displayed at least three of the four examples of the Batmobile used during the filming of the movie, Carscoops reported. One of these cars was displayed at a Batman event in London, another at a mall in Miami, and a third was displayed outside a hotel in Paris.

The YouTube video gives a close look at the real Batman car of 2022 and an even closer on at the engines at the rear. Previous videos of the car has shown that unlike the past Batmobiles, the new one is relatively subtle and looks more like a classic American muscle car. It gets a classic 1950s and 1960s muscle cars. The bodywork of the new Batmobile features matte black paint on most surfaces while the front end gets a striking look thanks to an LED light bar, a muscular hood, and a pronounced bumper.

The Batmobile model displayed in London was used for much of the film, the report stated. It is powered by a completely exposed V8 engine claimed to pump out around 650 hp. The car also features rugged-looking wheels with high-profile tyres, ensuring that the vehicle is up for anything that Batman can get through.

The Batman 2022 is set to release in cinemas on March 4 and apart from Pattinson, it starts Zoe Kravitz as Catwoman, as well as Jeffery Wright, Colin Farrell, Andy Serkis, John Turturro, Paul Dano and Peter Sarsgaard.