Home Auto News Watch: Man Fined For Driving While Sitting On Tyre Instead Of Seat In Australia

Watch: Man fined for driving while sitting on tyre instead of seat in Australia

The vehicle being driver by the man also lacked seat belts and a gear knob.The man was issued fines for not driving with due care and attention as well as for driving a vehicle that is not roadworthy.
By : HT Auto Desk
| Updated on: 06 Dec 2021, 10:49 AM 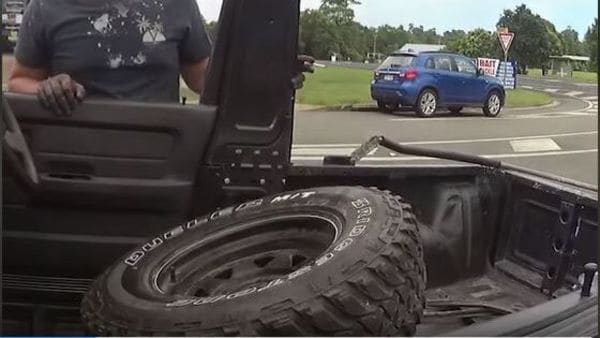 A man in Australia was caught driving a 1990's Suzuki Jimny converted into a pickup truck with the interior almost ripped off.

In a bizarre incident that took place in Australia's Queensland state, a man was found driving his old retrofitted Suzuki Jimny while sitting on a tyre instead of a proper seat. He was stopped by the Queensland Police Service last month and was hit with a number of fines, one being driving without proper care and attention.

The incident was captured via a bodycam being used by a police officer and was recently posted on Facebook by the Queensland Police Service. The footage shows that the man was driving a 1990's Suzuki Jimny converted into a pickup truck. As the officers approached the vehicle, the footage shows that the vehicle's interior was almost completely stripped out and there are no seats at all.

That's not all, the vehicle even lacked any seat belts and the gear knob, and the police had initially stopped the driver upon noticing that he is driving without a seat belt. Only upon approaching the vehicle and taking a close look did the officers realize that there are no seats at all. For whatever reason, it was very stupid of the driver to sit on a spare wheel and tyre, and drive on public roads.

The officer also questioned the driver about his lack of sense of responsibility for his own life and the life of other vulnerable road users. The officer asked him if he realizes that he could have badly hurt had some obstacle come unexpectedly or had he have to stop suddenly. Without a seat belt and for that matter, even a seat, he could have met with serious accident.

Police officer also issued a fine for the pickup being defected, and not being roadworthy. If the owner decides to keep driving it, he’ll have to get it fit with seats and seat belts.