Watch: Cops pull over autonomous Cruise car for driving without headlights on

The video posted on social media shows the driverless Cruise vehicle yielding to a police cruiser behind it by stopping at an intersection.
By : HT Auto Desk
| Updated on: 12 Apr 2022, 08:59 AM 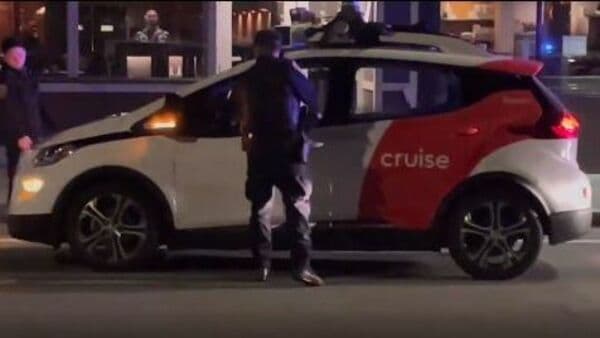 A driverless autonomous vehicle from GM-backed Cruise was recently pulled over by cops in San Francisco’s Richmond District for driving without its headlights on. A video footage of the incident has been posted by a social media user, showing the autonomous Chevrolet Bolt EV being inspected by a police officer.

The video shows the driverless vehicle yielding to a police cruiser behind it by stopping at an intersection, after which an officer comes out and peers into the Bolt's window. He tries pulling on the handle but the door doesn’t open, and the officer begins walking back to the cruiser, but then the Bolt pulls away. It drives through the intersection ands pulling off again to the side of the road while engaging flashing hazard lights. The cops then pull up back behind it.

Driverless vehicle platform Cruise responded to the viral video on Twitter, saying that the vehicle performed as intended by first yielding to the emergency vehicle and then pulling over once engaged. "Our AV yielded to the police vehicle, then pulled over to the nearest safe location for the traffic stop, as intended. An officer contacted Cruise personnel and no citation was issued," the company wrote.

The company further wrote that it works closely with the San Francisco Police Department on how to engage its vehicles in situations like this. There even is a dedicated phone number to call on when need arises. "We work closely with the SFPD on how to interact with our vehicles, including a dedicated phone number for them to call in situations like this," a comment from the company on Twitter read.

However, it is still unclear why the Cruise autonomous vehicle was allegedly driving without headlights on and why was no citation issued by the police officers.