Watch: Cop in SUV pushes burning car away from restaurant to avert tragedy

Flames from a blazing car at a drive-through could have engulfed the restaurant if an alert and brave cop in an SUV had not showed quick reflexes.
By : HT Auto Desk
| Updated on: 29 Apr 2020, 02:00 PM 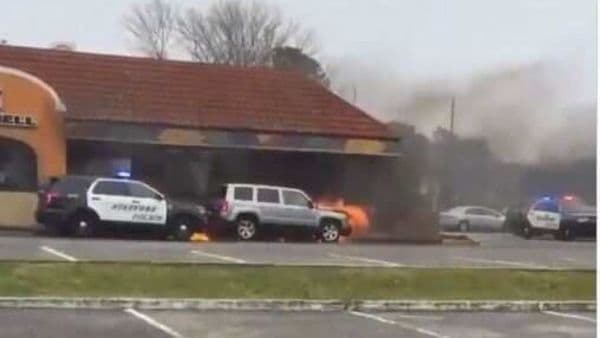 It is nerve-wrecking to see a vehicle catch flames but what could have been even more tragic was averted by a brave New Jersey cop recently. The Stafford Township police officer Keith Oler managed to push away a burning vehicle waiting in the drive-though lane of a Taco Bell outlet by getting behind the wheels of his SUV.

In the afternoon of 26th April, the vehicle reportedly burst into flames while waiting in the restaurant’s drive-through and the fire from the front of the car began spreading towards the lower portion of the restaurant. Officer Oler used his police SUV to push the burning car into an open area of the parking lot, where the Stafford Fire Department arrived to extinguish the fire.

A video of the incident has been shared on social media by the Stafford Police. It clearly shows the officer using his SUV to push the flame-caught vehicle into an open area. The tweet along with the video read, “Officer Oler arrived just in time to assist with a vehicle fire at the Taco Bell drive through today. Great job Officer Oler!!"

A police spokesperson said that the fire may have been caused by a mechanical issue within the vehicle. Luckily, the occupants of the car were not injured. The restaurant building however sustained minor damage.

Quick thinking! Vehicle fires are incredibly deadly. The amount of plastics, chemicals & accelerants in a car make them highly toxic. Moving that car to the most remote area of the lot probably saved the building & contained the scene for Fire services @StaffordPolice 👍🏻

Great job Officer !!! Thanks for keeping us all safe, god bless you and the entire Police Dept.

Twitterati applauded the police officer's bravery and the Stafford Police department's quick arrival at the scene.