Home Auto News Watch: A Peugeot Crashes After Sliding On A Wet Highway In Poland

Watch: A Peugeot crashes after sliding on a wet highway in Poland 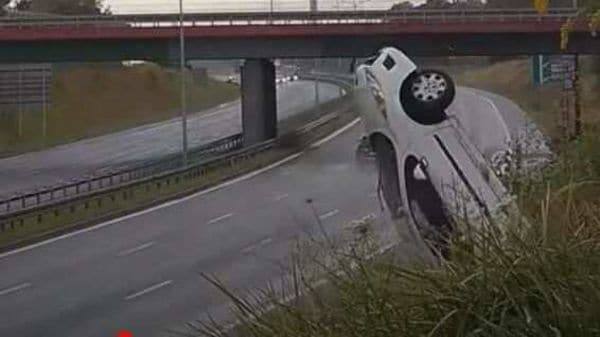 Screengrab of a video posted on YouTube by Business Control MONITORING

In a dreadful incident, a white Peugeot 207 crashed on a wet highway in Poland after the driver lost control of the vehicle. The car moving in the middle lane of a three-lane road, started sliding towards the right lane as the rear-end of the hatchback momentarily lost traction. The car then banged at the surface of the grass embankment on the highway.

Due to the immense force of the bang, the Peugeot can be seen going air borne in a filmed footage posted on social media. The air borne car makes twists and turns while above the ground before finally landing back on the wet highway.

The car, however, did not land straight but rather on its side. Its wheels did not touch the ground while the car kept spinning on the wet road before finally coming to a halt. Apparently, its rear bumper came off and the number plate at the front seemed to be hanging in a slanting manner.

It is not known what exactly caused the Peugeot to slide on the highway and eventually crash. However, it is speculated that the car's worn tyres couldn’t generate any grip on the wet road and thus slid away, as per CarScoops. It is also possible that the driver may have suddenly tugged at the steering wheel to the left and that led to the loss of traction at first.

It is also not known if the driver of the car suffered any serious injuries.