The XC40 Recharge is based on the XC40 small SUV. Recharge will be the overarching name for all chargeable Volvos with a fully electric and plug-in hybrid powertrain.
By : HT Correspondent
| Updated on: 17 Oct 2019, 05:37 PM 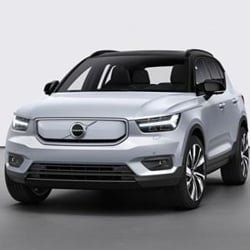 In line with India's push to go green on the road, Volvo Cars has launched its first fully electric SUV XC40 Recharge today.

The XC40 Recharge is based on the XC40 small SUV. Recharge will be the overarching name for all chargeable Volvos with a fully electric and plug-in hybrid powertrain.

The XC40 electric SUV has an all-wheel-drive powertrain that offers a range of over 400 km (WLTP) on a single charge.

Volvo claims that the 78 kWh lithium-ion battery is capable of charging the SUV to 80% of its capacity in 40 minutes on a fast-charger system. The XC40 Recharge also gets two 150 kW electric motors that will churn out 408hp.

XC40 Recharge is also the first car from the Swedish carmaker with a brand new infotainment system powered by Google's Android operating system.

The Android-powered infotainment system is fully integrated with Volvo On Call, the company's digital connected services platform to help customers to track how much time they spend driving on electric power.

As far as design and interiors are concerned, the XC40 Recharge will largely remain the same as its non-EV avatar.

Volvo Cars has assured that over the next five years the company will launch a fully electric car every year. The Swedish carmaker seeks to make all-electric cars 50 percent of global sales by 2025.

"We have said this several times before: for Volvo Cars, the future is electric," said Hakan Samuelsson, chief executive. "Today we take a major new step in that direction with the launch of our fully electric XC40 and the Recharge car line."

To meet the anticipated growth in demand, Volvo Cars aims to triple production capacity for its electric fleet. The company also aims for plug-in hybrid cars to make up 20 percent of total sales in 2020.