In an attempt to bring back its popular microbus from 1960s, Volkswagen is all geared up to introduce its electric ID.Buzz next year.The ID.Buzz electric microbus will also come autonomous variant.
By : HT Auto Desk
| Updated on: 24 Dec 2021, 13:30 PM 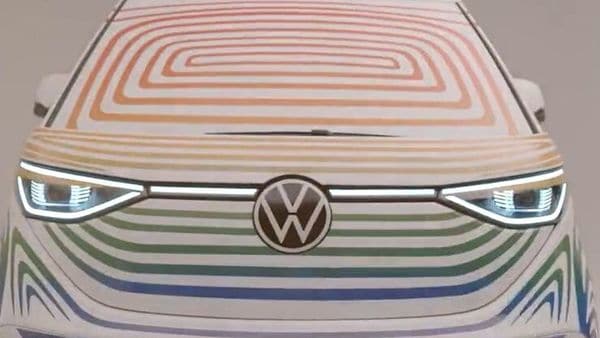 Screengrab from the video posted on Twitter by Volkswagen news.

Volkswagen has teased its much-awaited ID.Buzz electric minivan on its social media handle. The ID.Buzz is the electric version of the popular microbus that the Volkswagen had introduced in the 1960s.

The video gives a sneak peek into the design of the electric vehicle, showcasing its headlights and LED lighting. The teaser also features the door handles of the EV that seems to be illuminated and the lights also project a distinctive pattern on the ground. Though the auto major is yet to reveal the technical specification of the electric microbus, the EV is expected to come in various variants that are from a cargo van to an autonomous one.

It has been earlier reported that the autonomous version of the EV along with the LiDAR system will also feature radar sensors, cameras and an onboard computer that can look up 400 metres ahead of the microbus. It will help the vehicle to detect any kind of obstacle. The system has been developed by Argo AI.

During the 2021 IAA Munich auto show, it had been reported that the autonomous electric vehicle is a few months away from public road testing. Volkswagen had also stated that the Level 4 autonomous driving technology of ID.Buzz will eliminate the requirement of a human driver.

It has been reported that the entry-level model will likely have a rear-mounted electric motor that will have the ability to generate a power output of 201 hp and a peak torque of 310 Nm. It will also have an all-wheel-drive variant that may feature a dual-motor powertrain that might generate a combined output of 295 hp and a maximum torque of 459 Nm.