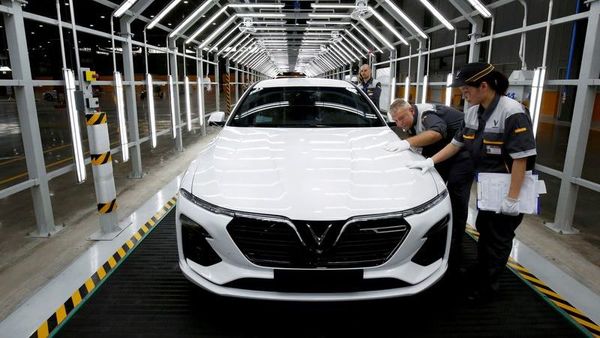 File photo of workers at Vinfast's auto plant on the occasion of its opening ceremony in Hai Phong city, Vietnam in 2019.

Vietnamese electric vehicle maker VinFast has begun the construction of a battery manufacturing plant in the country that will help to power its electric vehicles and buses. The company has planned to make an investment of around $173.7 million in the first phase. The factory will also have the capacity to produce around 1,00,000 lithium battery packs per year, the parent company Vingroup said in a statement.

The factory will be established in the central province of Ha Tinh and will be developed over eight hectares. In the second phase, the factory will expand production to include battery cells and make one million battery packs a year. However, the company refrained from providing any timeline. The EV company is also planning to build a factory by the end of 2024. It recently unveiled two all-electric SUVs, VF e35 and VF e36, at the Los Angeles Auto show last month.

The company is aiming to take global preorders for its electric vehicles in the first half of 2022. For its Vietnamese market, the company will deliver its first EVs to its domestic customers on December 25.

The company is also restructuring ahead of its planned US initial public o1ffering in the second half of 2022. The company has informed that Vingroup’s 51.52% stake in VinFast will be transferred to a Singapore subsidiary. Sources stated that VinFast could raise as much as $3 billion from an IPO.

The company is expecting to have a post-IPO value of $25 billion to $60 billion, Vice Chairwoman Le Thi Thu Thuy had stated to Bloomberg News last month. Thuy also went ahead to share that the company is also in talks with potential investors to raise billions of dollars in both debt and equity to finance its electric vehicle expansion in the United States.