Passengers in the Mahindra XUV700 have been reported to be safe.Mahindra XUV700 achieved a perfect score in the Global NCAP crash test last year.
By : HT Auto Desk
| Updated on: 27 Mar 2022, 04:28 PM 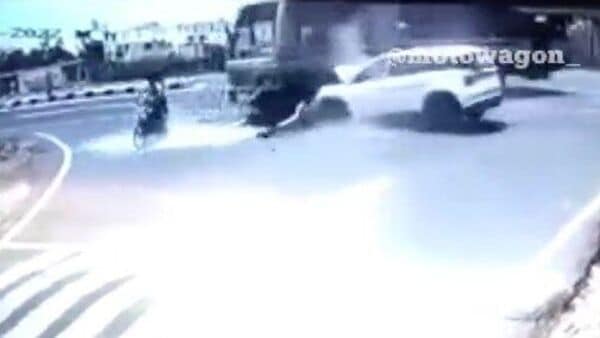 Screenshot from the video posted on Twitter by MotoWagon.

A recent video of an incident where a Mahindra XUV700 crashed into a Tamil Nadu transport bus has garnered significant views after it was posted on Twitter by MotoWagon. In the video, one can see the Mahindra XUV700 dashing the bus's front side while it came from the opposite side on a highway crossing. Despite the impact, one can observe the cabin of the car majorly remained undamaged. It has been reported that passengers in the SUV were also safe.

The video also caught the attention of Mahindra Group's Chairperson Anand Mahindra and he took to the microblogging site to share his views. He said he was grateful that all the passengers in the XUV700 were safe. He further added in his tweet, “Safety is the predominant design objective in all our vehicles. This news item reinforces that philosophy. I’m grateful to our team for walking the talk in their designs & I hope this inspires them to rise even further."

Last year, Mahindra XUV700 scored a perfect five-star rating in the Global NCAP safety crash test. The SUV got five stars for adult occupants and four stars for child occupants. In the past report, Velusamy R, Chief of Global Product Development, Mahindra & Mahindra had stated it is the automaker's mission to bring safer vehicles on Indian roads that also feature maximum structural integrity and modern technology to provide maximum safety, performance and efficiency.