Registration of three-wheelers and commercial vehicles saw the biggest decline in January.FADA states dip in registration of passenger vehicles could have been more significant if new launches and traction for SUVs weren't key factors.
By : HT Auto Desk
| Updated on: 09 Feb 2021, 12:33 PM 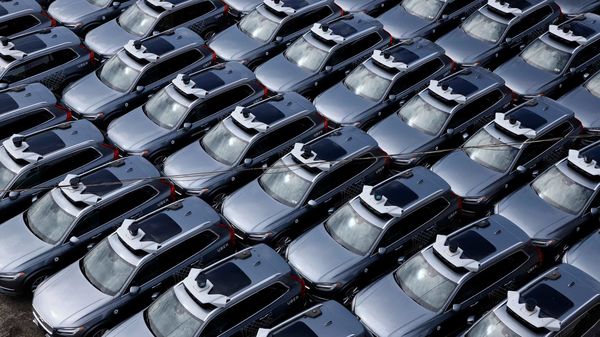 File photo of Volvo cars parked in a space in Detroit, US.

After a year-on-year growth reported in December of 2020, January brought with it gloomy news once again for the automotive industry in India with vehicle registration falling by 9.66%. The fall was witnessed across segments, excluding tractors which registered a year-on-year growth of 11.14%.

On a year-on-year basis, registration of new two wheelers fell by 8.78%, dipped by 4.46% for passenger vehicles, tanked by a massive 51.31% for three-wheelers and declined by 25% in the commercial vehicle segment, as per data revealed on Tuesday by Federation of Automobile Dealers Associations (FADA).

Factors such as non-availability of vehicles due to scarcity of semiconductors, a fading pent-up demand and recent price hikes coupled with no festivities and auspicious days landed January registrations in negative zone, FADA further informed. "After witnessing a one off growth in December, January auto registrations fell once again by 10% YoY. Auto industry clearly misjudged the demand which returned post lockdown," said Vinkesh Gulati, FADA President.

Gulati specifically highlighted that the dip in registration of passenger vehicles was checked owing to new launches and high traction for SUVs in the market. Else the dip could have been more significant, he added.

It is also believed that because there was a transition from BS 4 to BS 6 around this time of last year, there were discounts galore which pulled up sales and registrations. This may have had an effect on the contrast this past month when being compared to figures from January of 2020.

FADA though highlights it remains optimistic about prospects ahead. Underlining the announcements of voluntary scrappage policy and increased spending on infrastructure in in Budget 2021, it is expected that the figures will likely improve gradually, aided by the continued opening up of the country in Covid times.