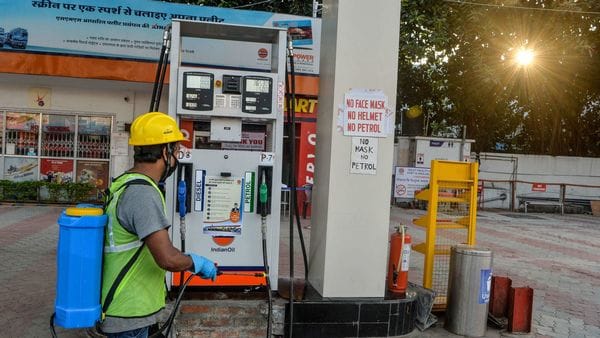 The state government has imposed the additional tax on petrol by ₹2 per litre, and ₹1 per litre for diesel in the time of crisis.

The Uttar Pradesh government has joined the list of states to increase Value Added Tax (VAT) on fuel prices amid the ongoing coronavirus crisis. The state's finance minister Suresh Khanna was quoted by new agency ANI today that VAT on petrol and diesel has been hiked.

The state government has imposed the additional tax on petrol by ₹2 per litre, and ₹1 per litre for diesel in the time of crisis. Though no reason was shared by the minister, it is likely that the government has taken the decision under pressure to increase revenue.

VAT has been increased by ₹2 per litre on petrol and ₹1 per litre on diesel. New prices will be applicable from today midnight: UP Finance Minister Suresh Khanna pic.twitter.com/9Pg5dKURcD

Taxes on petrol and diesel and liquor comprise almost 40-50 per cent of state revenues. Any increase in taxes on these items would boost a state's coffers at a time when over a month of lockdown has brought business activity to a standstill and has consequently affected GST collections of state, that in few cases, are estimated to fall more than 80-90 per cent in April.

Similar steps have been taken by several other states in the past few days. On Tuesday, the Centre too had hiked excise duty and cess on petrol by ₹10 per litre and on diesel by ₹13 per litre.

Retail prices of petrol and diesel have, however, not been impacted by the rise in excise duty and cess as oil companies will adjust them against the recent fall in international crude oil prices.

Petrol prices in the national capital were hiked by ₹1.67 a litre and diesel by a steep ₹7.10 per litre after the Delhi government raised local sales tax or value-added tax (VAT) on the two fuels.

(Also read: Here is how much tax you pay on petrol and diesel in India)

Last week, Haryana had decided to increase bus fare by 15 paise per km and hike the VAT on diesel and petrol prices. The fare for ordinary, luxury and super luxury buses has been hiked from 85 paisa per passenger per km to ₹1 per passenger per km to partially meet the increased cost of operation of buses, an official statement said after a meeting of the state cabinet.

Consumers can expect to pay more for auto fuels and liquor in coming days as more and more states are expected to target these for increasing their revenue which has been severely hit by Covid-19 outbreak and subsequent lockdown.

Sources in the Central and state governments said that as the two segments (petroleum products and liquor) remain outside the purview of GST, taxes on it could be easily raised by the state governments through a notification.