Many second-hand vehicles shipped to Africa from Japan are believed to have failed, or were about to fail, pollution tests there.But in many parts of Africa such regulations are often poorly enforced, and rampant corruption ensures that used vehicles can slip by any controls.
By : AP
| Updated on: 02 Mar 2020, 08:53 AM 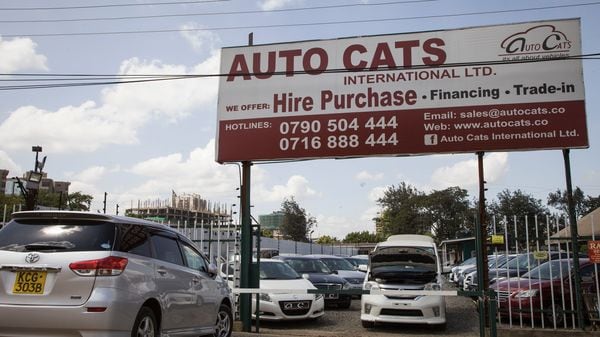 In many parts of sub-Saharan Africa new wheels often mean a used car from Japan or Europe which are affordable to the growing middle class, but environmental activists and others complain that the second-hand vehicles, unable to meet stringent pollution tests elsewhere, are simply being dumped in the world's poorest continent. (AP Photo/Sayyid Abdul Azim)

Salesmen whistle at potential buyers of scores of vehicles shining in the afternoon sun. One truck might bring over $20,000 but it's far from the “brand new" ride the salesman touts it to be while attempting to start the engine.

The truck is one of tens of thousands of second-hand vehicles imported each year into Uganda from Europe or Asia, especially Japan. In much of sub-Saharan Africa, the imports satisfy demand for mobility while many public transport systems are rudimentary and newer models are not affordable to many in the growing middle class.

But the used vehicles are a problem, say officials. They contribute the pollution burden on a continent that contributes far less than other regions to the emissions that cause global warming.

Africa has become “the burial ground of vehicles that run on fossil fuel as the West turns to electric and newer cleaner technologies," said Philip Jakpor, an activist with the Nigerian branch of the group Friends of the Earth.

Many second-hand vehicles shipped to Africa from Japan are believed to have failed, or were about to fail, pollution tests there, according to the U.N. Environment Program. But in many parts of Africa such regulations are often poorly enforced, and rampant corruption ensures that used vehicles can slip by any controls.

The UNEP, which calls air pollution a “silent killer" in Africa that is responsible for about 7 million deaths each year, has warned that vehicle emissions are a major source of deteriorating air quality in booming cities. 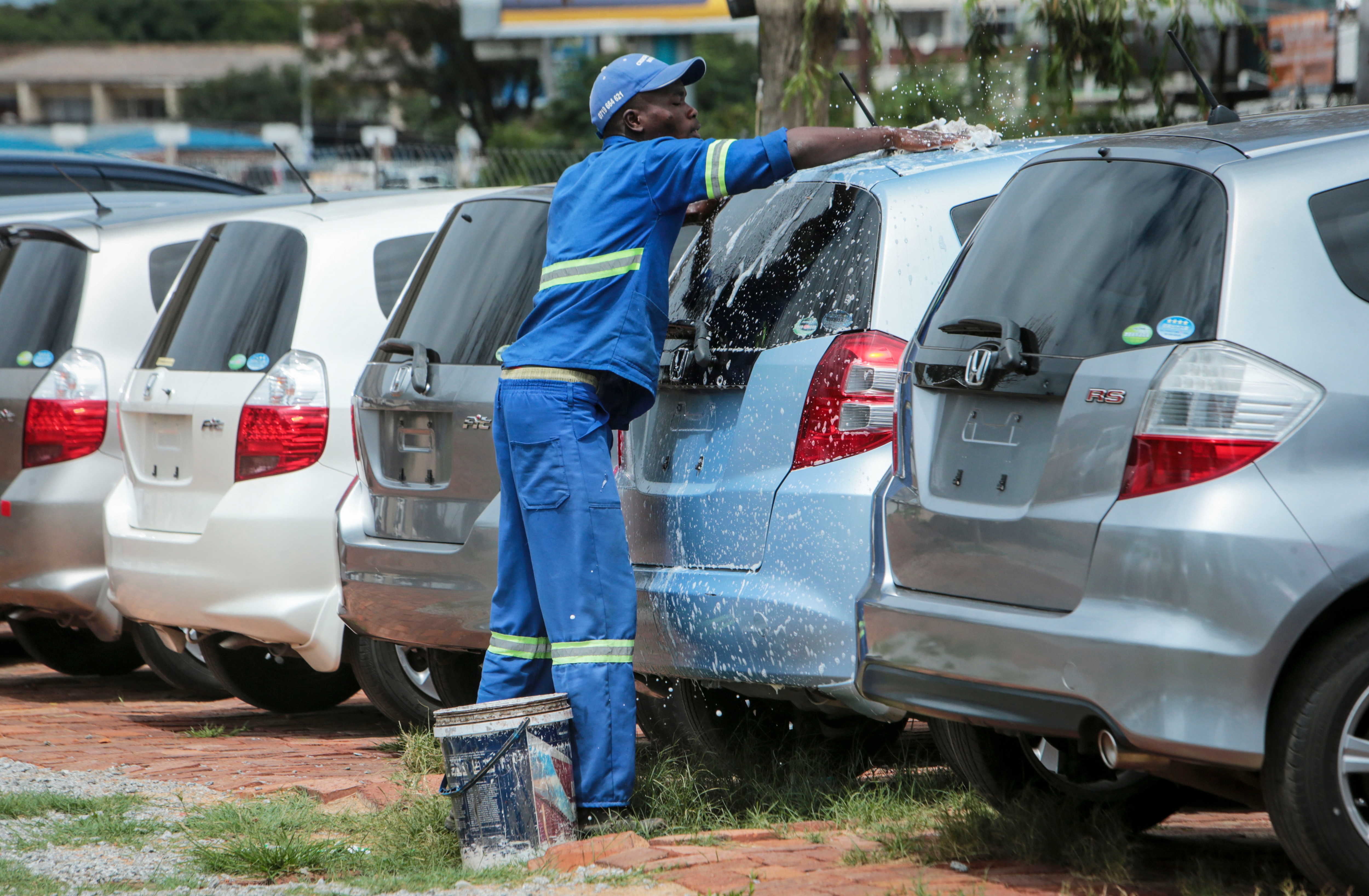 In this photo taken Tuesday, Feb. 25, 2020, a worker washes used cars for sale in the capital Harare, Zimbabwe. (AP)

More than 1.2 million used vehicles were imported into Africa in 2017, according to U.N. figures. Most were destined for Nigeria and Kenya, two of Africa's largest economies. Both countries also have car-assembling plants.

“The West has refused to transfer technology or make the technology to transit to be cheap and accessible," Jakpor said. "Our governments have equally failed to invest in renewables and transition, so we will have this dumping for a long time."

A used vehicle made in, say, 2010 can seem new to both buyer and seller in the East African country without a single car-assembling plant and where rickety vehicles are ubiquitous. It's not uncommon to see vehicles emitting a fog of dark fumes. Police frequently attribute deadly accidents to vehicles in dangerous condition.

“You cannot wake up and put a total ban" on used vehicles, said Dicksons Kateshumbwa, Uganda's commissioner in charge of customs revenue. “There is a growing middle-income (class). Everyone who gets a job, and gets money, wants to drive."

Taxes on used vehicles are “a key component" of the revenue agency's overall collection targets, he said. He added there is no evidence suggesting that stiffer environmental levies on used cars cut into demand.

Car dealers in the Ugandan capital of Kampala told The Associated Press that demand for used vehicles remains solid because importers target certain vehicles that are much sought-after no matter how old they are. The Toyota RAV4 and Toyota Harrier are much-loved locally, for example.

“Ugandans are conversant with older models, so they are looking for those," said car importer Amir Hussein of Cosmos Uganda Ltd. “For many people, it is their mindset: that old is solid, is good." Uganda's government last year contracted two companies to inspect used vehicles before they are shipped. The head of the standards agency acknowledges the system is imperfect as not all vehicles are subjected to tests as they cross into the country. Inspectors based in Uganda only carry out spot checks.

Ben Manyindo, head of the Uganda National Bureau of Standards, called for a plan that eventually would lead to the banning of used vehicles from abroad.

The question of whether to impose import restrictions remains contentious despite wide recognition of the dangers of an unlimited flow of used vehicles into Africa, the continent least equipped to deal with climate-changing carbon emissions.

In Zimbabwe, where the government has tried and failed to impose restrictions amid resistance from importers and others, there is no age limit for imported cars. Used cars are not checked for emissions levels when they enter the southern African nation from ports in Tanzania, Namibia and South Africa, which notably allows the importation of used vehicles only for re-export to other countries.

Zimbabwe's environment protection agency lacks the resources to conduct effective spot checks for emissions, and over the years the government has appeared fickle in its attempts to regulate the trade in used vehicles.

In 2010 the government banned the importation of vehicles older than five years but later backed down. In December the finance minister announced that older cars would pay less import duty than newer cars, sparking criticism from some lawmakers and environmentalists who argued the measure would encourage people to buy cars that are more harmful to the environment.

“The old cars have higher emissions and are dumped on us because they are no longer considered as fit for the roads in their countries of origin," said Byron Zamasiya of the Zimbabwe Environmental Law Association, which urges stricter controls. “We should be incentivizing people to import newer cars than older ones."

Used cars from Japan are so common in Zimbabwe that the business may be one of the few still profitable in a country reeling from serious economic woes. Zimbabweans spent over $5 billion importing used cars between 2006 and 2016, and an average of 300 pass through Beitbridge, the main border crossing with South Africa, according to official figures.

Open spaces in cities such as Zimbabwe's capital, Harare, have been taken over by used-car dealers selling anything from small sedans to rundown buses following the collapse of the country's once-vibrant car assembly industry. A usually unreliable public transport system also fuels demand for used vehicles among people who can still afford one.

Like Uganda, Nigeria restricts importations of vehicles older than 15 years, but importers working with corrupt officials can always beat the system, according to importer Motola Adebayo. He believes the ability to bribe customs officials has encouraged an influx of very old vehicles into Africa's most populous country.

Oke Ndubuisi, a taxi driver in Lagos, reasoned that “here in Nigeria, because people are paying very little as transport fares, you cannot easily recover the cost of your investment in a vehicle if it is an expensive one."

The taxi he drives is one of many that contribute to air pollution in Nigeria's bustling commercial capital.

“The prices of new vehicles will have to come down in order to address the problem of pollution caused by old vehicles," he said.