Since taking office this month, the Biden administration has made swift moves to pause sales of oil and gas leases on federal land, cancel the Keystone XL pipeline and expand the government’s fleet of clean-energy vehicles.
By : Bloomberg
| Updated on: 30 Jan 2021, 08:51 PM 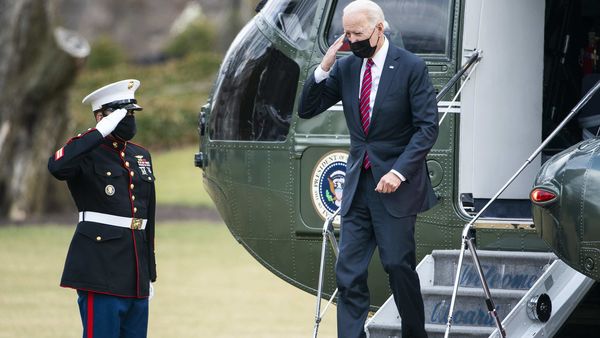 U.S. President Joe Biden disembarks from Marine One on the South Lawn of the White House in Washington, D.C. (Representational Image)

American oil executives began a pushback against some of President Joe Biden’s climate policies by making the case that fossil fuels from U.S. shale have a lower carbon footprint than imports.

Since taking office this month, the Biden administration has made swift moves to pause sales of oil and gas leases on federal land, cancel the Keystone XL pipeline and expand the government’s fleet of clean-energy vehicles. The U.S. oil industry, already under pressure from low prices and investor pessimism, is particularly concerned about limiting access to resources on federal acreage in New Mexico, Wyoming, Alaska and the Gulf of Mexico.

“We don’t think it’s good policy to be overly restrictive on federal land," Chevron’s Chief Financial Officer Pierre Breber said in an interview with Bloomberg TV on Friday. “That will just move energy production to other countries. We know that we can develop energy in this country responsibly."

America is the world’s biggest consumer of crude and any restrictions of domestic production will mean more will have to be shipped in from other countries, which may produce higher-carbon oil and have less stringent environmental laws, the argument runs. U.S.-produced shale emits less carbon per barrel than the global average for both onshore and offshore, according to Rystad Energy.

“Reducing domestic production will not only raise costs at the pump, but will also ensure international producers, operating with fewer environmental regulations, will meet the global demand for petroleum products," Pioneer Natural Resources Co.’s Chief Executive Officer Scott Sheffield said by email. “That scenario is inconsistent with the administration’s choice to rejoin the Paris Accord."

(Also Read: Why oil companies’ fall from favor could cause next price spike)

The Oil-Climate Index, a 2016 model funded by the Carnegie Endowment, shows that shale plays including the Eagle Ford in South Texas and the Bakken in North Dakota have some of the lowest emissions per barrel globally.

But key to shale’s climate impact is how operators manage natural gas that is produced alongside the crude and the industry has come under intense criticism for excessive flaring and venting of methane, an extremely harmful practice.

For example, while the Bakken ranked ahead of Saudi Arabia’s Ghawar resource in the Oil-Climate Index, parts of the shale field where flaring is prevalent fell behind the Middle Eastern field. The Permian Basin has become notorious for burning off gas and the index is currently being updated by some of the original researchers to include estimates for the deposit. A Cornell University study published in 2019 said fracking was to blame for a decade-long global spike in methane levels.

All the major shale players including Chevron and Pioneer say they support Biden’s plans to increase regulation of methane leaks, reversing former President Donald Trump’s policy. But anxiety is rising in the fossil fuel industry that it may be in for a sustained period of government pressure.

Given that operators tend to stockpile leases for months or even years before they plan to drill, it’s unlikely that Biden’s action will have any short-term impact on shale production. In any case, operators are keen to show investors that they won’t grow production into an oversupplied market.

It’s the Gulf of Mexico, where leases come up for sale infrequently and projects cost in the billions of dollars, where the largest impact of Biden’s policies may be felt, according to Chevron CEO Mike Wirth.

“The risks are probably greater in the Gulf of Mexico," he said on a call with analysts. “If conditions in the U.S. become so onerous that it really disincentivizes investment we’ve got other places we can take those dollars."