UK to ensure no Brexit cliff-edge for carmakers

UK carmakers including Nissan and Jaguar Land Rover won’t face a regulatory cliff-edge that damages their competitiveness in European markets at the end of 2020, according to Prime Minister Boris Johnson’s government.
By : Bloomberg
| Updated on: 22 Jan 2020, 10:04 AM 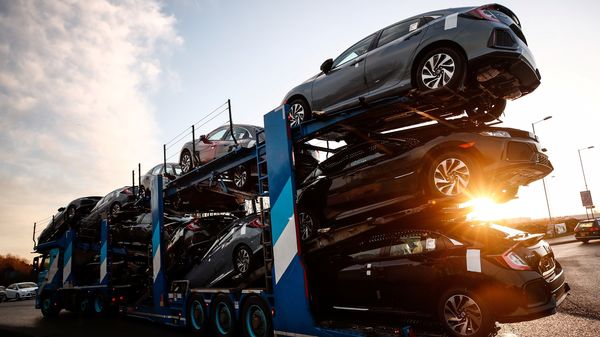 Terms of Trade is a daily newsletter that untangles a world embroiled in trade wars. Sign up here.

U.K. carmakers including Nissan and Jaguar Land Rover won’t face a regulatory cliff-edge that damages their competitiveness in European markets at the end of 2020, according to Prime Minister Boris Johnson’s government.

Nadhim Zahawi, a business minister, said he’s “confident" British negotiators will be able to broker a deal with the European Union which ensures no tariffs or quotas on car parts and keeps just-in-time supply chains running when the 11-month Brexit transition period is due to expire at the end of the year.

Opposition politicians have warned Britain faces a no-deal divorce on Dec. 31, disrupting trade and damaging the economy, if Johnson fails to negotiate a free trade deal by then. EU leaders have said there isn’t time to broker a full agreement under the prime minister’s schedule for ending the transition, during which trading rules will largely be unchanged.

“Those who are fighting the old battles of Leave/Remain still have this binary view of the world of ‘oh my goodness, if we can’t get a deal there is going to be a cliff-edge’ -- I don’t believe that is true," Zahawi said in an interview. “The heads of terms agreed by the U.K. and the EU say there are no tariffs, no quotas, and that is what we are going to strive for. And that, I believe, we will be able to deliver."

The U.K. auto industry suffered a series of setbacks in 2019 as production slumped and manufacturers idled plants to cope with three Brexit deadlines that came and went. Jaguar Land Rover Automotive Plc announced thousands of job cuts, Honda Motor Co. said it will close its only British factory in 2021 and Nissan Motor Co. scrapped plans to build the X-Trail sports utility vehicle in Sunderland, northeast England. Meanwhile PSA Group has suggested its Vauxhall factory in England’s Ellesmere Port is in jeopardy if Brexit affects profitability.

Ruling out tariffs and quotas will eliminate the bulk of paperwork, according to Zahawi. “The rest then becomes about the actual quality of the product and that already works for manufacturers around the world that are selling into the EU," he said. “Components have to be made so that they satisfy British standards in the future as well as satisfying European standards. It is not incompatible."

Chancellor of the Exchequer Sajid Javid warned business leaders they’ll need to adjust to new rules after Brexit because the U.K. won’t align with European regulations, according to a Financial Times interview published over the weekend. But Zahawi suggested the U.K. is unlikely to diverge too much.

“We will make sure our rules are as good as the industry needs to be in order to take the opportunity of selling into America, selling into Europe, selling all over the world," Zahawi said. “The chancellor was stating a fact which was that we will not be a rule-taker. But at the same time, whether it’s the chemicals industry or the auto industry, we already manufacture to the same quality standards across the board."

Javid reiterated on Tuesday that the U.K. will be out of the EU’s single market and customs union when it leaves the bloc. “We will not be rule-takers," he said in Brussels before a meeting of EU finance ministers. “At the same time we want a deep, comprehensive free-trade agreement and that’s what we’re working on."

The chancellor’s comments come after an International Monetary Fund report said the U.K. economy will outperform the Eurozone this year and next -- as long as there’s a gradual transition to a new relationship with the EU.

“It will be a very important time for British business," Javid said. “I can see a British economy that continues to go from strength to strength."