TVS Apache RTR 160 review: A facelift has made it a more likeable, mature motorcycle

TVS claims that the Apache RTR 160 is faster and a much better performer. We took it for a quick ride at the company’s Hosur facility to test the company’s claims.
By : Arun Nadar
| Updated on: 23 Mar 2018, 08:53 AM 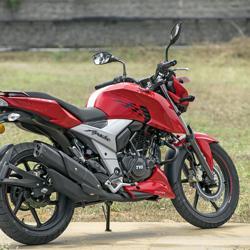 The TVS Apache RTR 160 has been a stepping stone into the Apache family; and despite its importance, the bike received only one facelift in its decade-long innings. The bike maker has finally given the Apache RTR 160 the much-needed overhaul it deserves. It now comes with two engine variants - carburettor and fuel-injection. We got to spend some time with the new motorcycle at the company's test track facility in Hosur.

TVS designers have approached a top-down approach with the new Apache RTR 160. Its styling is inspired from its elder sibling - the Apache RTR 200. Now, this isn't a bad strategy, as the TVS Apache RTR 200 is a handsome-looking motorcycle. In fact, they look so similar that it's easier to list the differences, which include a simple new alloy design, a fresh centre body panel, a one-piece seat unit and conventional handlebars. The 160 also misses out on the new fly screen, redesigned graphics and slipper clutch, which debuted on the 2018 RTR 200. 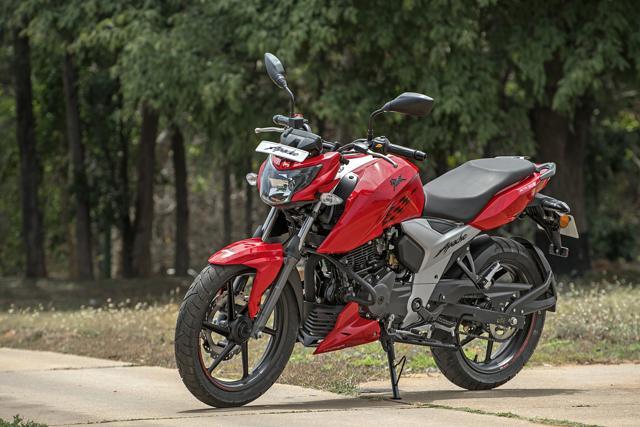 The boomerang-shaped LED DRLs borrowed from the RTR 200 give the 160 an aggressive face; and it also gets the same LED tail-light. The sharing of parts continues with the all-digital instrument console (a first for the Apache RTR 160) being carried forward. The fuel-injected version of the RTR 160 gets a gear-position indicator and a lap timer, both of which are missing on the carburettor variant's console. Switch gear also has been carried forward and its quality levels are impressive. The fit and finish levels are at par with those seen on TVS' latest offerings; they are very good with tight panel gaps, with most of the wirings being wrapped and covered up, neatly.

The Apache range has always been about performance; and the new Apache RTR 160 now boasts of the most powerful motor in its segment. TVS is offering the new motorcycle with two engine options - carburettor and fuel-injection. The carb variant pumps out 16.5hp, while the fuel-injected mill is rated at 16.8hp. Torque figure remains identical, at 14.8Nm. It also gets 4-valve technology, while most of its competitors employ a 2-valve head. As I exited the pits and entered the track, the first thing that I took notice of was the smoothness of the motor. TVS engines aren't famous for refinement but the new 160cc engine is about to change that perception. 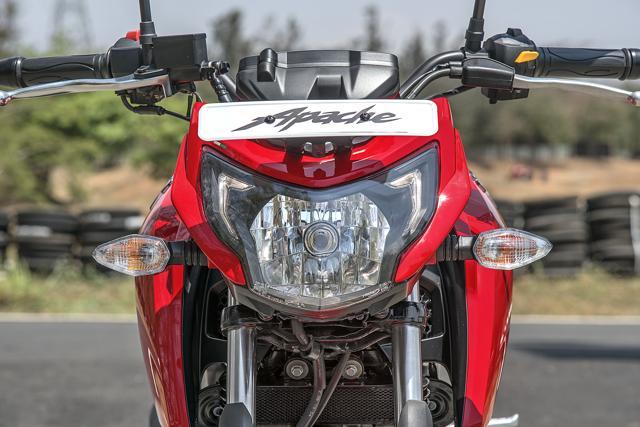 The motor likes to be revved and minor vibes can be felt post 7,500rpm, which gain intensity at around 9,000rpm - but the vibes never get out of hand. While the fuel-injected variant offered better throttle response and felt a tad bit more refined than the carb variant, I preferred the latter, owing to its sharper acceleration. The carb engine also felt more engaging to ride and in tune with the racing DNA of Apache. With my hefty weight, I managed to clock 117kph on the main straight, while much thinner (and well, fitter) riders managed to clock a top whack of 125kph - not bad, for a 160cc engine! However, TVS engineers have focused their efforts on low-end grunt and the fifth gear is pretty tall, which means gathering speed post-100kph needs patience. The sweet spot for the engine is between 85-95kph, while the 5-speed gear box offers crisp shifts.

Clutch action is smooth, but, I felt it was a bit too 'jumpy'. Now this nature is good for posting impressive acceleration timings; but riding in traffic could be tiresome. For better heat dissipation, the new motor also gets the benefit of an oil-cooler. Since we were riding the bikes at a good clip, we couldn't really test the efficiency of the oil-cooler. We will have to ride the motorcycles in real world conditions to pass judgment on that. TVS doesn't claim any official mileage figures but company personnel told us that the bike returned around 45kpl in their test cycles. 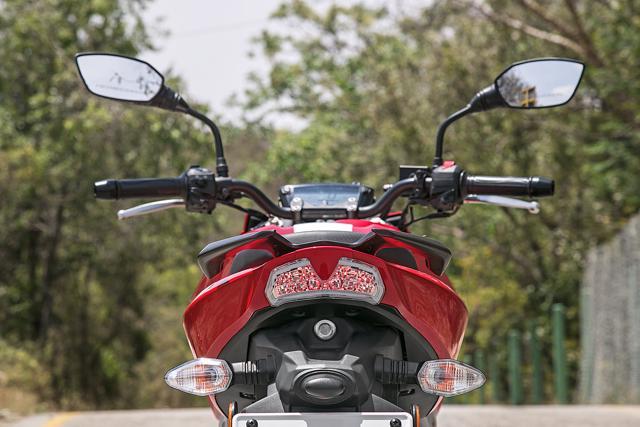 The first thing you will notice as you sit on the motorcycle is the riding posture. Unlike the clip-on handlebars seen on the Apache RTR 200, the new motorcycle features a pair of flat and wide handlebars. This results in an upright and relaxed riding position; although the footpegs are still slightly rear-set, so the riding position still has a likeable, but manageable, level of sportiness. Both the rider and the pillion won't be squeezed for space, either as the single-piece seat is generously sized. The big change to the way the RTR 160 handles comes down to the fact that it also borrows the double-cradle split-frame chassis from its elder sibling.

The difference in handling dynamics could be felt the moment we entered our first corner. The bike turns into the corner with enthusiasm and holds its line through the corner without any problem. However, the rear felt a bit bouncy - especially over bumps on the corner exit. This was likely down to my weight and dialling up the pre-load setting to six (out of the total seven), ironed-out the issue, allowing me to comfortably carry more corner speed. 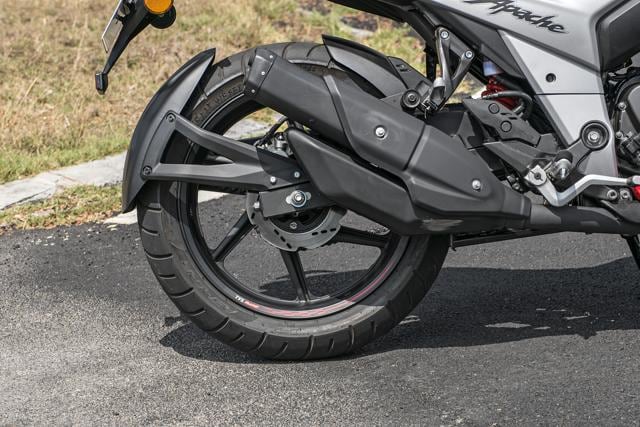 The new frame also endowed the Apache RTR 160 with a monoshock suspension for the first time, sourced from Showa, while the front features smaller 33mm diameter telescopic forks, in comparison to the RTR 200. The 17-inch alloy wheels come wrapped with TVS Remora tyres that offer adequate grip. Interestingly, the drum brake version gets a 110/80 section tyre at the rear while the disc brake versions ride on 130/70 rubber. TVS says this helps reduce the entry-level price. However, we only rode the dual-disc brake variant and felt that the braking prowess of the motorcycle could have been better. You have to squeeze the lever hard for the brakes to dig in. Also, considering that TVS was the first Indian manufacturer to ever offer optional ABS in 2011, it's unfortunate to see that the RTR 160 doesn't offer customers this option. All the updates mentioned above have clearly affected the kerb weight, as the new Apache RTR 160 is 10kg heavier than its predecessor, while its tank capacity remains identical at 12 litres.

All of TVS' updates have transformed the new Apache RTR 160 into a much more likeable and mature motorcycle. Also, TVS is offering the new motorcycle in three variants with prices starting at ₹81,490 which is a good value for what it offers. This version has the makings to become another popular offering from TVS.