The remote controlled four-wheeler, which was seen serving ball during rugby games, reminded many of the Volkswagen ID.4 scale model used for the same purpose during Euro 2021.
By : HT Auto Desk
| Updated on: 28 Jul 2021, 12:16 PM 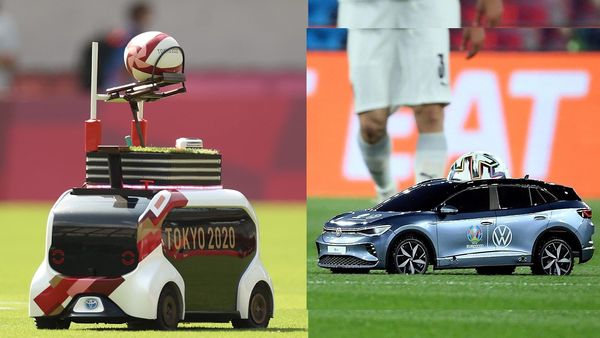 The tiny remote-controlled car from Toyota, used for match ball delivery during rugby games at Tokyo Olympics, reminded many of the Volkswagen ID.4 model used for same purpose during Euro 2021.

Toyota Motor, the official sponsor at the Tokyo Olympics 2021, has offered several vehicles to be used at the Games for transport and other purposes. But one, the smallest among them, has generated much interest among viewers and social media platforms.

Toyota is using a tiny remote-controlled car for match ball delivery during rugby games at Tokyo Olympics. The car, which appears to be the scale model of the autonomous vehicle Toyota e-Palette, which is being used as the official transport for athletes and officials at the event.

The tiny car was used for the first time during the Rugby 7s game between hosts Japan and Fiji. Before the match started, the tiny Toyota car was seen entering the field with the rugby ball neatly perched on top of it, thanks to a customised catapult-like structure developed for the purpose.

The vehicle moved about swiftly across the field, flashing green lights. It became an instant hit with spectators, viewers and social media as it proved to be enough to get them excited.

🚨 We have robots carrying #rugby balls on the field 🚨#StartYourImpossible @Toyota pic.twitter.com/mJoAzOVYm4

Several users likened the Toyota car with the Volkswagen ID.4 electric car's 1:5 scale model which was used for similar purpose of delivering match balls during the recently concluded Euro 2021 football championship. Like Toyota, Volkswagen was the official sponsor at the annual football event.

I was so nervous. pic.twitter.com/TJr6KH0QGd

Toyota has offered a number of its driverless autonomous vehicles to be used during the Tokyo Olympics as part of shuttle service for all the athletes and officials. The cube-shaped electric autonomous vehicles, called the ‘Tokyo 2020 Version’, are aimed to support athlete mobility at the Tokyo Olympics and Paralympic Games this year. The vehicles will move participants between venues and Games village in a loop-line transportation.

The battery-electric, automated vehicles have a range of around 150 kms on single charge and can run at a speed of 19 kmph. They are equipped with automated driving system that includes advanced sensors such as cameras and LiDAR.