Home Auto News To Battle Pollution, Delhi To Ban Entry Of Heavy Vehicles From Other States

To battle pollution, Delhi to ban entry of heavy vehicles from other states 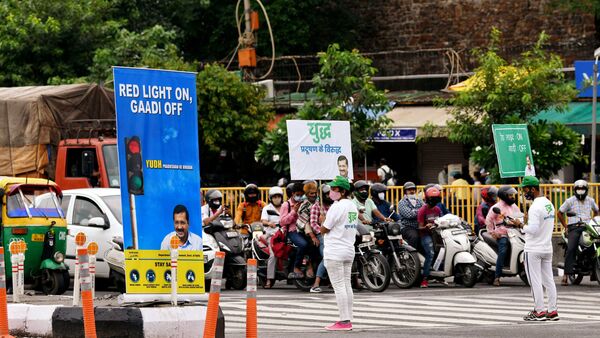 File photo: Volunteers hold placards at a traffic point as part of the Delhi government Red Light On, Gaadi Off campaign to reduce pollution level in the national capital.

The Delhi government has decided to ban the entry of heavy vehicles from other states making their way into the capital city between the October-February time period of this and next year. While there are certain exemptions announced, the overall move is squarely aimed at bringing down vehicular pollution here in the winter months.

Delhi pollution levels mostly remain alarmingly high through the year but in winter months, the air quality index turns outright toxic. While there are several factors blamed for this - from farm stubble burning to climatic conditions, vehicular emissions also contribute to deteriorating air quality each year. As such, the decision has been taken to prevent the entry of heavy vehicles into Delhi from October 1 to February 28 of 2023.

Officials however say that diesel-powered trucks carrying essential items like vegetables, fruits, grains, milk and other similar commodities would be exempted. Additionally, heavy vehicles running on CNG and battery power would also be permitted.

While the move has the potential to bring down vehicular emissions when put into force, not everyone is cheering the decision just yet. Transport organizations and traders' association in particular have amply expressed their displeasure and say that not only would this move hurt Delhi's image as a retail hub but potentially - and adversely - impact flow of goods and services during the festive and wedding season. Additionally, many say that fuel pump stations would be impacted due to lower sales.

The Delhi government claims it has also been asking neighbouring states to check on emissions levels from heavy vehicles registered in the respective states.